I can't possibly be the only one who is this excited for school to be out? ;) 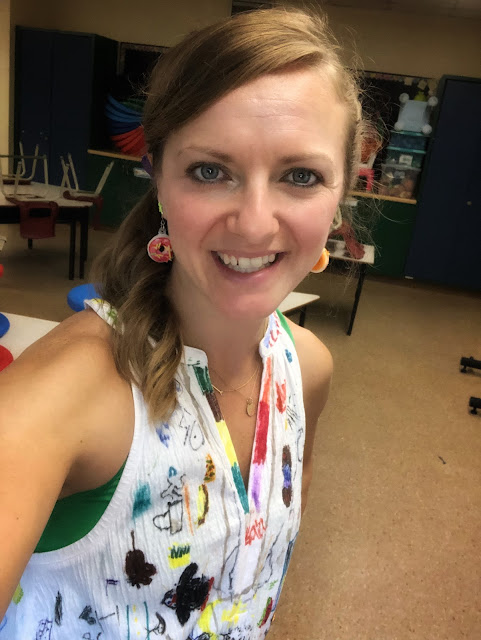 We had a great last day together and it poured from the heavens so everyone was soaked by the time they got to school!

But then the weather decided to make a crazy drastic turn...Enter Heat Wave.

The temperature was in the high twenties with humidity values making it feel like 30... oh boy!

I started to get ready after I woke up from a late afternoon nap, lol. I was so tired honestly. I kept my side braid in from school because I thought it showed off my NL map on my tank. ;) 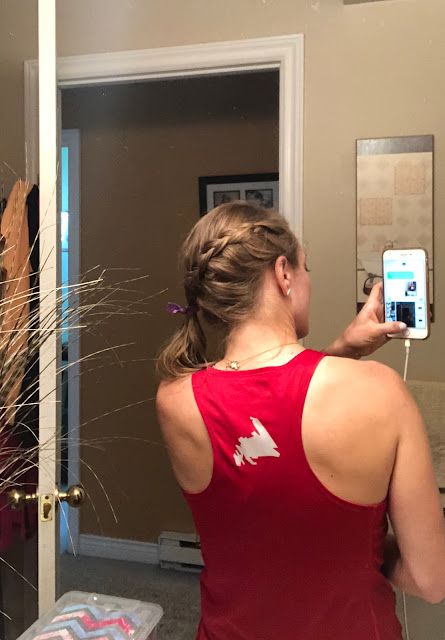 I headed over to Dartmouth and parked at the mall which was only 1km from the start line. OH! Tiux sent me new glasses so I thought it was the perfect time to try them out! They are only $19.99 and with HEATHERLCTIUX at the checkout you can get 20% off, just sayin'. ;) 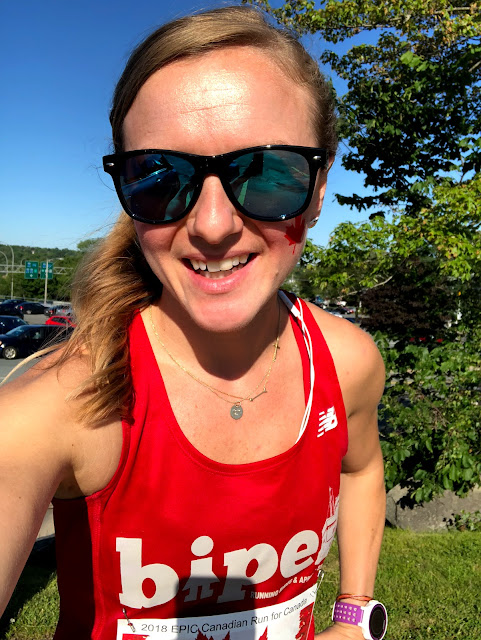 I was already sweating by the time I got to the start...lol.

I wasn't too worried about it though because I signed up for this race for fun as a way to celebrate school being done. Not to mention that 6.1km is pretty short, so doable in this heat.

The route may somewhat be shaped like a heart, but it was heartless!!!! Ouch! Let me explain... 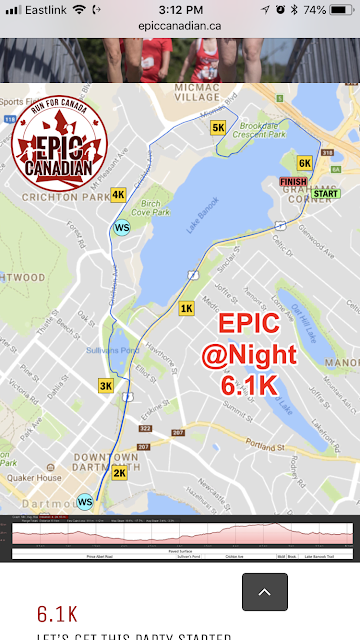 I did a little 2.5 mile warm up where I felt as heavy as lead and was soaking with sweat...good times.  I also saw and chatted with Avery, Nicole and Cindy. It was nice to see familiar faces since I travelled alone.

Then we headed up to the start line about 6:55 ish.
You can see me just to the left of the guy in the lime green shirt. My immediate thoughts: "What AM I doing?" Short fast races are NOT my thing, lol. But maybe that's why I suck at them???

The first couple of KMs were great! We ran by the lake as the paddlers were out and it was flat. And THEN...

We headed down this little street that sort of veered left ( I honestly have no clue what it was). I saw Kendra, correction: Kendra yelled my name and I tried to focus and find her, lol. Immediately to the right was also Don who was volunteering...MY thoughts: This is a decline, I'm going fast. We have to come back up this!

And so we did.

This is where I started to die a bit and get VERY hot. I was like, whatever. It's just for fun, while still trying to push what I could do. We finally got off the street and into a park area where we were directed to the left which was a massive hill!!!!! I really was seriously hoping the volunteer was wrong AND that the runners ahead just made a very bad decision and misunderstood where they were supposed to go, but nope. We chugged up and my "run" became a jog, walk, hobble? I thought I was going to throw up for sure! This was during 3-4km. 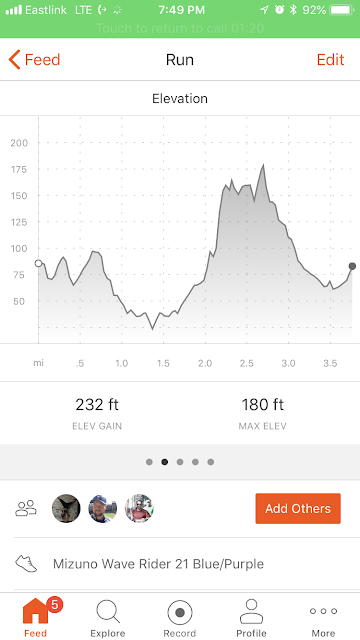 Then when we got to the top...five years later, I realized how high up we were and surely we'd have to come down? So I tried to zoom down the hill by Micmac Mall. We were then told to go right and then right again and left onto the trail that goes around the lake. (This was a very NICE section of down). Running around the lake I saw the 5k mark and I knew that I could basically suffer through anything for 1km. Even though I was fighting off vomit. Yep, true story.

I kept pushing and my pace quickened. :D

The finish at EPIC is awesome! Take a look: 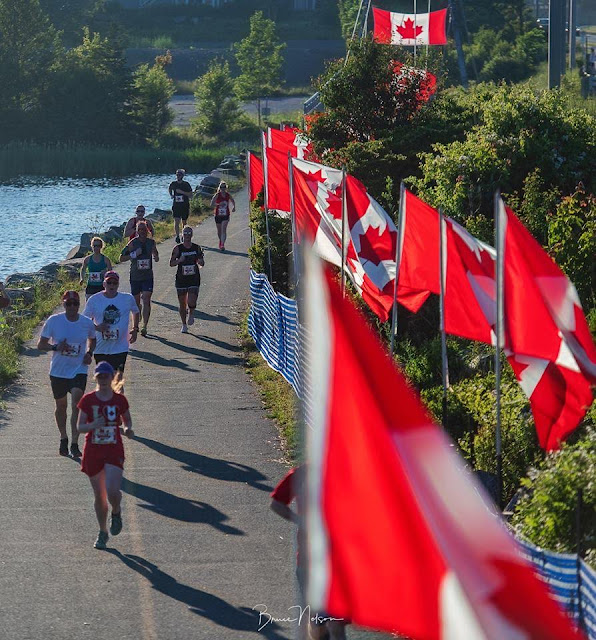 I high fived the Race Director Tim Chesnutt and I really wanted to thank him for standing out there in the storm of Boston and get super fab photos, but all I could do was high five and NOT puke ON him. Oh my...classy!

A volunteer handed me a flat cup with a plastic bag attached and I knew what it was for...lol. Too bad I kept missing and puked twice EVERYWHERE! 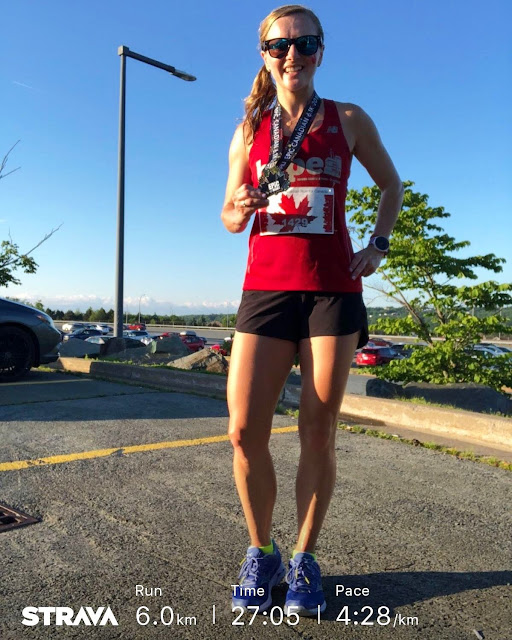 I really signed up initially for the medal! Look how cool it is! 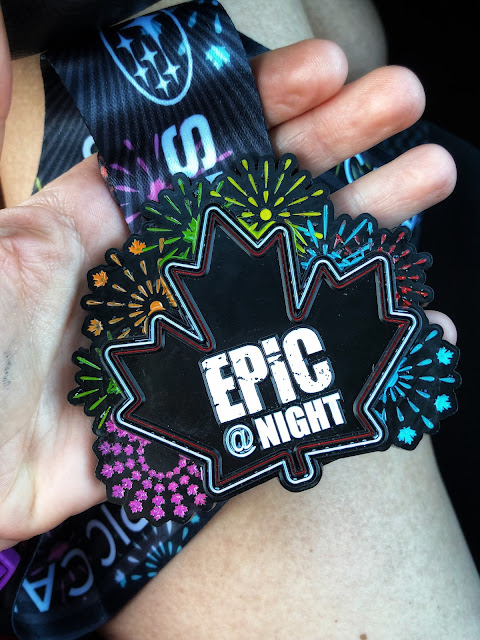 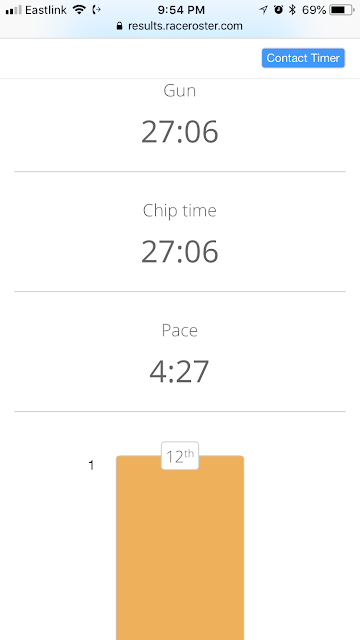 After I drank copious amounts of water I headed back over to the car and Matt and I celebrated with Pizza! Happy Summer to me!

Tomorrow I am heading over AGAIN for the 10.5...Let's pray for cooler temperatures!

Did you run EPIC?

Thanks for checking in!