Boston you beast, you've broken my heart yet again and I keep coming back for more. 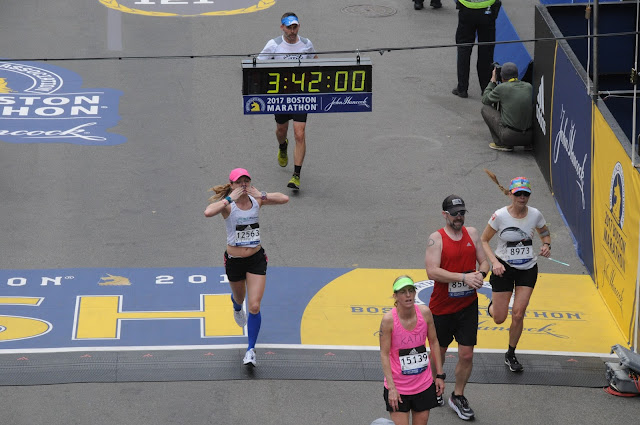 I did it, my 5th Boston Marathon and with each passing year and training cycle new challenges and obstacles arise. This year I have to say was the toughest when it comes to health and training and crossing the mat on Monday afternoon in the heat of Boston filled me with gratitude. <3

Now let's get to the nitty gritty:

I had a little bit of a meltdown on Sunday morning after battling a fuzzy head and a sore throat for the past 4-5 days. I had gargled so much salt water it was sickening. Marg and Matt tried to comfort me as best they could, but I just really felt like I was not meant to run Boston this year especially with my reliance on a puffer now also. Finally, I put on my big girl running shorts and said, "You didn't come all this way to not run! Get out there and have fun no matter what!" so that's what I did. Boy what a pity party...be thankful you weren't invited!

Race eve at Tom's Pizza-the same meal I've had for the past two Bostons! Pesto Pasta with chicken. 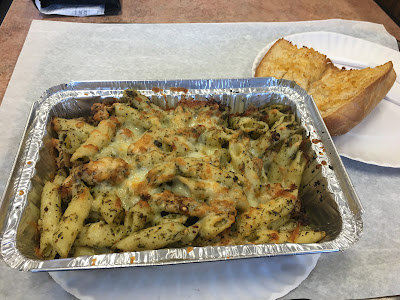 When my alarm went off on Monday morning, I could not believe it. Boston was here yet again! 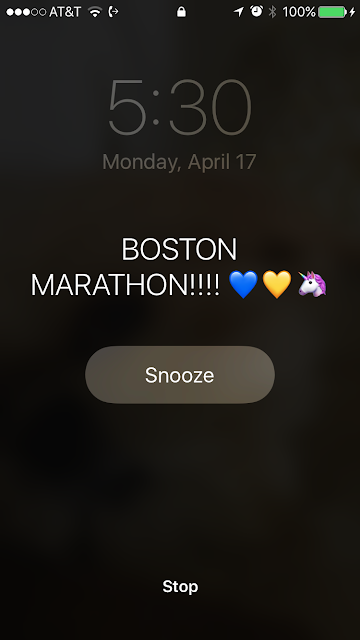 I tried really hard to enjoy my bagel but it just wasn't going down smoothly, lol. 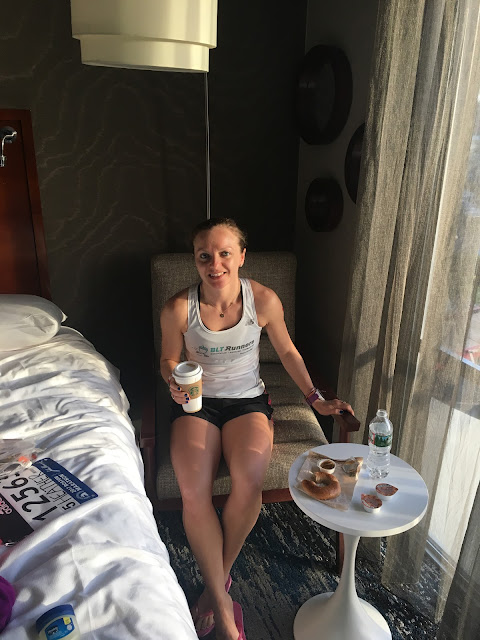 I packed my mini bag for the athlete's village and tried hard not to panic over the temperature outside. 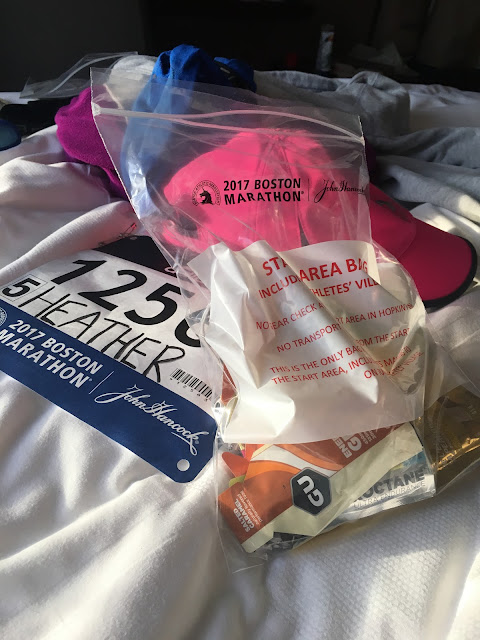 Immediately after this picture was taken I ditched my throwaways and decided to save them for another race! 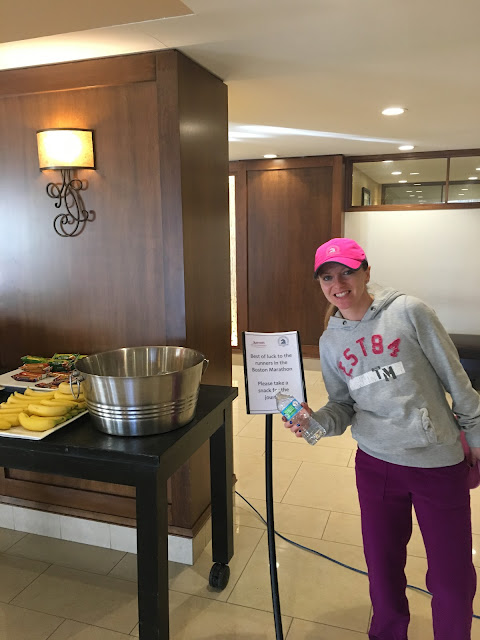 Throughout marathon training so many things are under your control. I've learned that race day weather is the one thing you cannot control. The true victory is how you handle it. 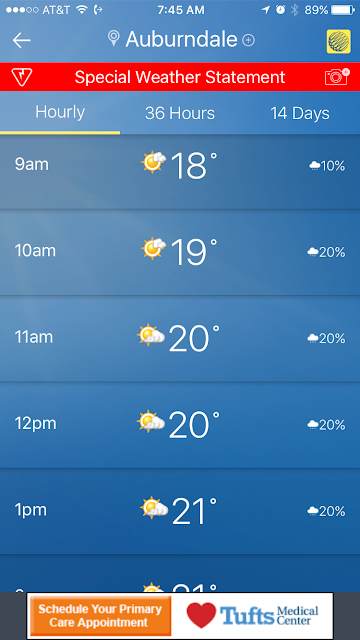 At least the sun made for some good pre-race photos??? 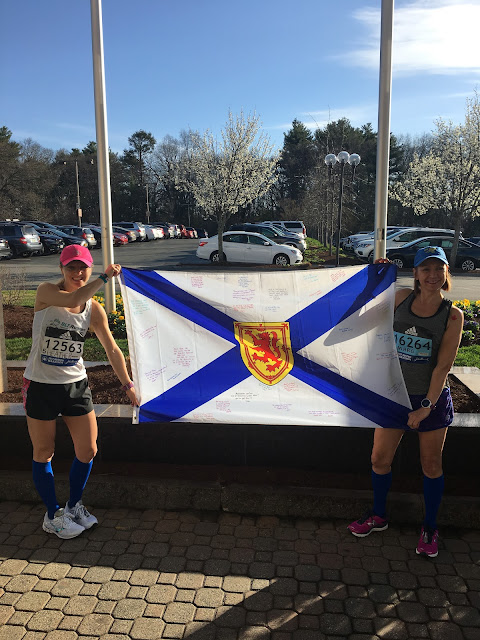 Next year we'll both be running Boston!!! 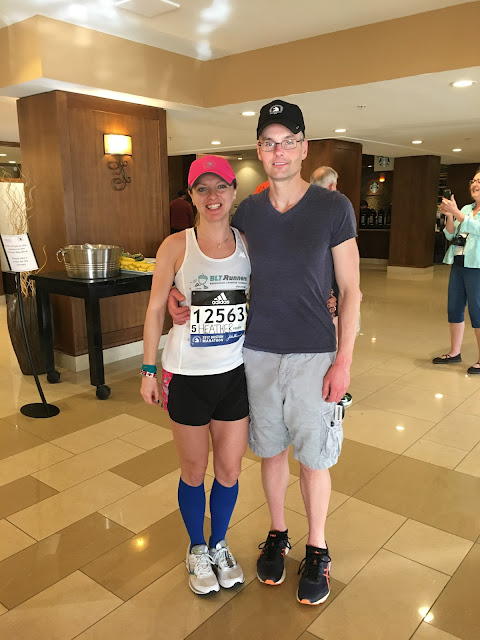 After an hour commute from the hotel we arrived in Hopkinton!!!! Having Marg on the bus made me feel calm. 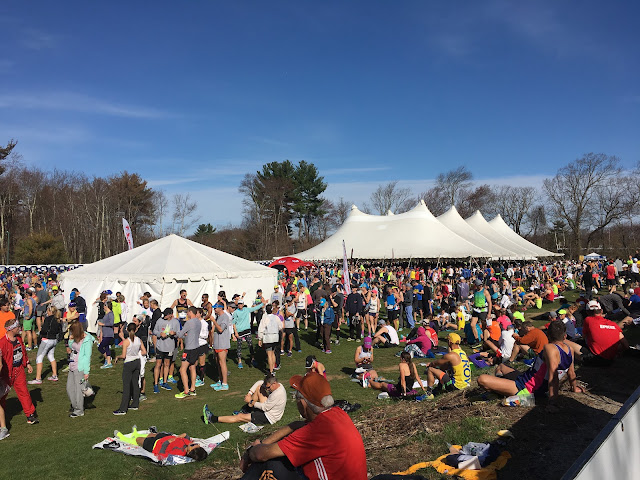 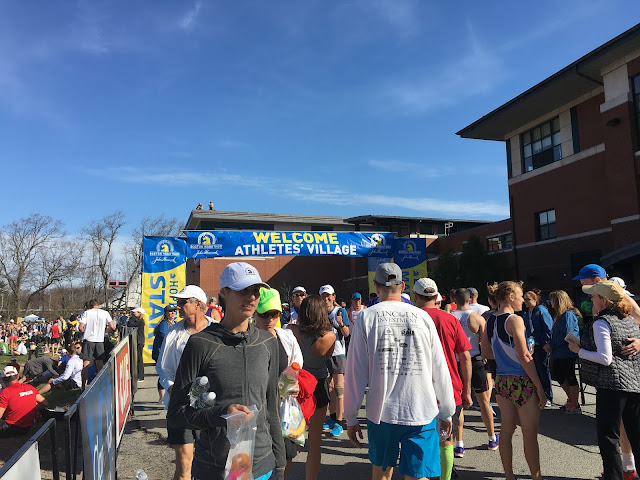 Did someone say camera? LOL. 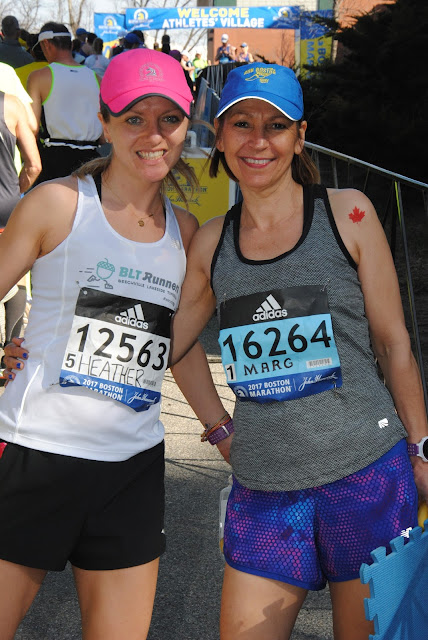 I was in wave 2 so after a bathroom stop, bagel and coffee I said my good lucks to her and headed down to the corrals. Gulp-this was genuinely the first year I wondered if I would actually finish. My mind was definitely getting the better of me and mentally I was not as fit as I'd hoped. I also heard two girls make comments at the start when I used my puffer that really upset me. (I honestly have never heard someone speak negatively about others until that moment at the Boston Marathon. It really made me sad). I tried to not let it get to me and remember MY race plan for the day...run by feel and HAVE FUN! Oh, and try not to pass out in the heat. ;)

They had a very awesome decked out runner station on the way to the corrals where you could get anything you needed but forgot, (vaseline, elastics, band aids, etc.). Another girl and I decided we'd go all badass and sharpie our names on our arms. She wrote mine and then I wrote hers...she requested I write "MELON," her nickname. I wrote it and she said, "whoa look at this printing! Are you a teacher?" LOL...she nodded in satisfaction when I said, "YES!" LOL. I thought it was real funny.

Jennie and Corinne were at the start in my corral and it was awesome to see them take off! It was hot for me from the get go.

Even before the heat posed a threat Greg and I chatted about maintaining an 8 min/mile pace for the first five miles and then assessing from there. Well, let's just say at 5 miles, all I was thinking about was how I was going to lose layers. My plan was to ditch the top and pin my bib to my bra when I saw Matt. I fumbled with my bib before Newton but my wet sweaty fingers couldn't quite accomplish this and I was soooo scared of dropping my bib!
I won't make this post super long with a mile by mile recap because I'm sure that each one would sound very similar!

At each mile I took a Gatorade and 1-2 waters. One was ALWAYS for face splashing and head dumping. I also ran under EVERY water hose that was set up. It felt so awesome!!!

At the ten km checkpoint I was really struggling. But then I saw Bart Yasso and I was so star-struck! He cheered me on!!!!!!!!! I then had a bit more spring in my step.

Wellesley was fun!!!! I LOVE how you can hear them far before you can see the university students! I didn't stop for kisses but many did!

My clothes were absolutely soaked through and sticking to me. I wondered about all of my friends running the same marathon. Where are they now? How are they doing? Are they suffering in this heat? I hope they're okay!

Entering Newton the hill at Newton Lower Falls just after a huge 1/2 mile downhill was taunting me. I chugged my way up and was pleasantly surprised when I reached the top! My next mission would be to keep my eyes peeled for Tom and Matt.

Matt was just a few steps ahead on the left and I saw him quickly. I stopped. Yes stopped. I said, "I'm done. It's just too hot!" He confusedly handed me water and said, "You better get going!" I stopped long enough that my Garmin paused and I was kind of annoyed at Matt's persistence that I keep running in this hilly inferno...lol. Obviously I'm glad I continued. ;)

The hills of Newton:
Again not as bad as I imagined. That's always the case, even though I did slow it was more for fear that I would push my body too far and collapse. By this point there were people being carried off by medics and some of the first aid people running in the opposite direction with stretchers. That's NEVER fun to see! I knew there were 4 long inclines with some dips and flat sections in between. Each one was like a task I had to do. I thanked God for every mile I made it through and before I knew it I was at Mile 20 where Heartbreak Hill Running Company is. That's where Matt and I went to get my jacket on Friday! They have a Mile 20 unicorn painted on the street and I ran over it. It felt like this unicorn was sending me extra strength to power through to the finish. I took a Mr. Freeze from a kid. It was green. I'd never had that flavour before but the cold ice water sliding down my throat was pure salvation! One hill to go. I can do it. I've done harder things...maybe? ;) I kept running one foot in front of the other. Hey my toes feel good! I don't even think I have ANY blisters yet! I grabbed at least two orange slices from spectators. I LOVE YOU SPECTATORS! Is there anything better than citrus when you're dehydrated?!?!?! And trust me when I say it was dehydration nation up in here!

I looked for Boston College. Then I knew the hills were over. I see it. I see the Heartbreak arch that says, "The Heartbreak is Over." And I smile. 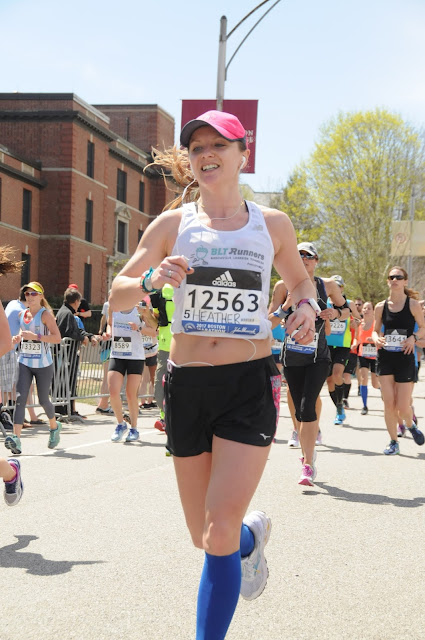 Boston College is my favourite part along the course. It always has so many people I get overwhelmed and I can't stop smiling. It smells like beer. Some guy who has clearly had a few of them yells out, "Go BLT Running!" I grinned wondering if he also thought BLT stood for Bacon Lettuce Tomato.

As happy as I was, I knew these last ~5 ish miles were not going to be pleasant.
"Just keep running!" I said. I thought of my winter long runs. They were freezing! I thought of my long runs with Marg and the Moose run with Marg and Stacey. I remembered the 22 mile long run I did when it was frigid out. Man I wish I was cold now.

I see the graveyard-the haunted mile they say. More runners drop out here than any other point along the course. But not me. Not today. I'm powering through. Look I'm already at mile 23! I take another Mr. Freeze. This one was blue and more solid than the previous so I ran with it for over 1/2 mile.

Each checkpoint for runner tracking got progressively slower and I thought of people watching, wondering what was happening to Heather's pace?  Did they know how much I was thinking of them? My friends? My family? My students? Remember they thought I'd win! I have to keep trucking along at least for my students so they can see the unicorn I'll get at the finish.

The heat kept coming but I kept running. A building had the temperature flashing and 23 Celsius is what it said. That's much hotter than I have run in, much. But I continued listening to my body and absorbing the atmosphere.

I ran through bubbles. I smiled at the girls jumping on mini trampolines and the drumming band. I was thankful for all the cheers. They are out here for us. <3

I see the Citgo sign. Don't look at it. Don't look at it. It's deceiving for runners because you think you're almost done, but it's a mile away when you GET TO IT. Finally, I did. I see the Boston Strong bridge and the blue lines that have been painted just for the marathon. I'm running on the lines...all the way in. Then there's the little tunnel you go under. It hurts. It's a small but noticeable incline and I see a man with one fake leg. I clap and give him thumbs up. I have no excuses.

I searched for fellow Nova Scotians as I turned right on Hereford. I can't see them there's too many people. I hear screaming and cheering and all things Boylston!

I turn. I see the finish and I'm coming. I'm finishing this Boston Marathon! 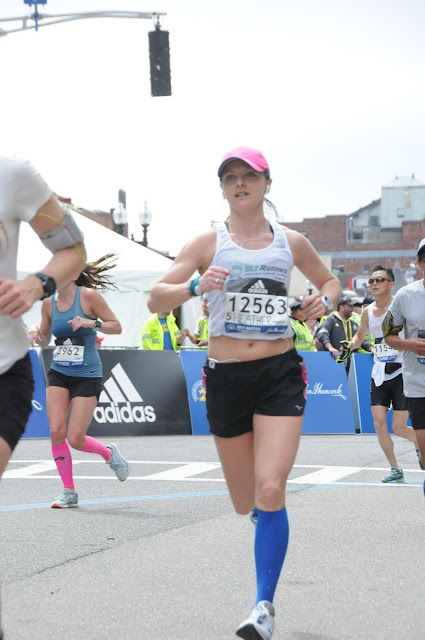 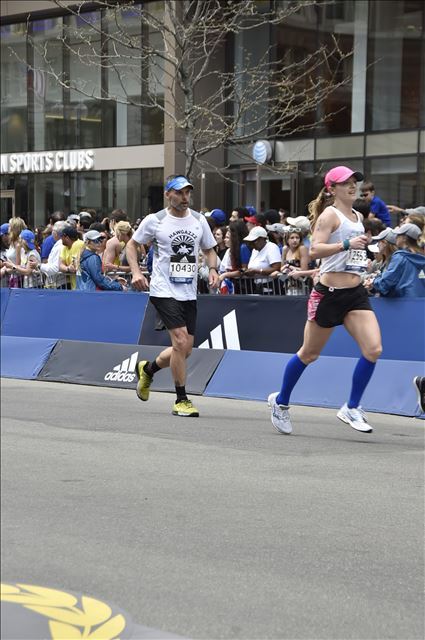 Thank you God! I did it! 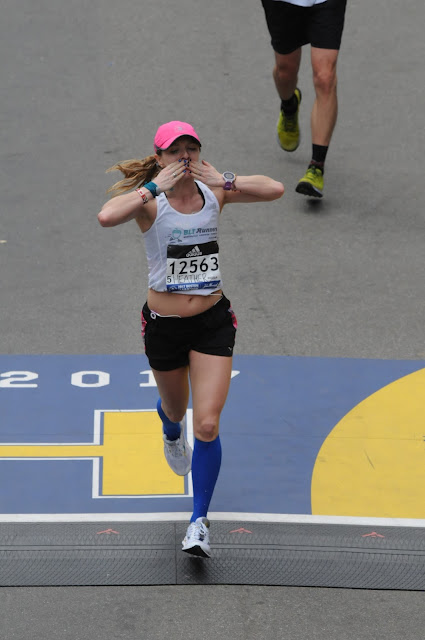 An emotional proud mess filled with thanks! 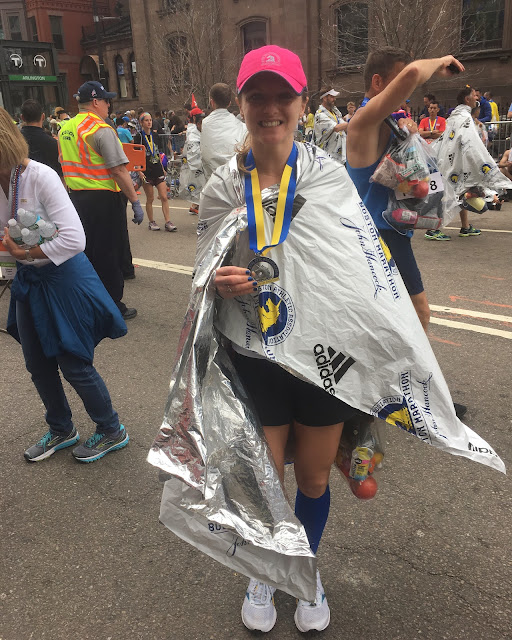 Time wasn't even on my mind at all. Monday was all about finishing. Conquering the marathon and listening to my body.

It was a tough day for us Nova Scotians dealing with the heat but we powered through!!! Congratulations to everyone and an amazing thanks to all the volunteers!!!!! Thanks also to my running friends...I really did think of you ALL!!!! 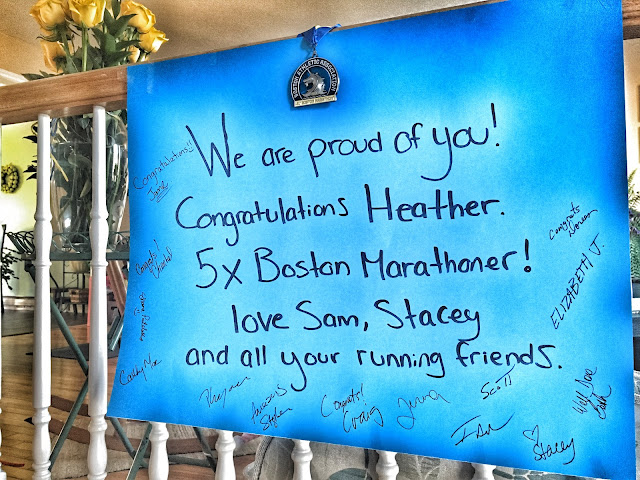 And of course thank you to Matt who went with me to Boston and supported! I wonder what would have happened if he wasn't there to insist I keep going? ;)

Special thanks to tiux and Mizuno for decking me out in amazing running swag!!!!! I am forever grateful. :)

Thank you to you also for reading my recap! If it is too long I apologize, but Boston recaps can't be too short!

Do you have a Boston Story????