You know what marathon training doesn't do? Prep you to peak for a fast ten k race during the training cycle. True words. Ask me to keep my pace for hours on end, sure. Ask me to run it one minute faster per mile in scorching heat? Sorry, no can do apparently. ;)  That's the quick and dirty of yesterdays' race. I know that this is not the case for ALL runners, and I DO incorporate speedwork into my routine. I'm just always thinking of my BIG race during training (Chicago Marathon) and am not willing to sacrifice my legs for an injury during marathon training. :)
I signed up for this race in the winter because it's one of those I do every year just because. I literally didn't get up until after six in the morning because it's close to where I live and it didn't start until 9:15 (more time to warm up the asphalt and surrounding buildings). But I was going to do it none the less!

My bib and tee: 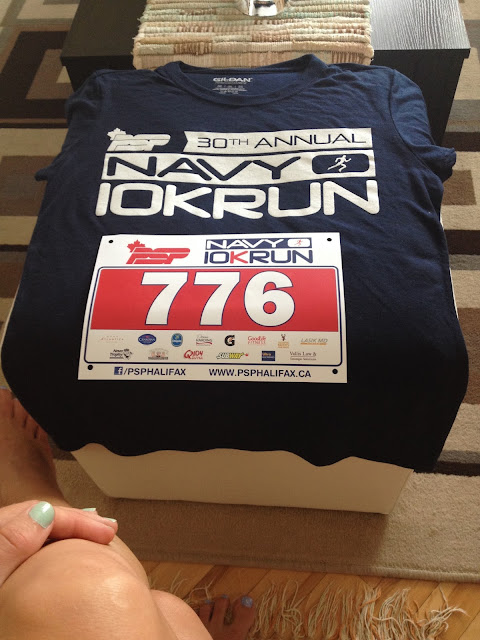 I was well fuelled! Mango salsa fajitas and brown rice! 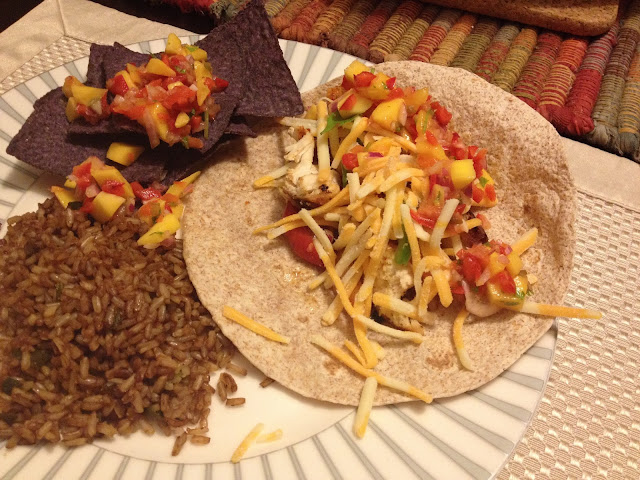 My ww pancakes. :D This was Saturday's breakfast, not race morning...lol. 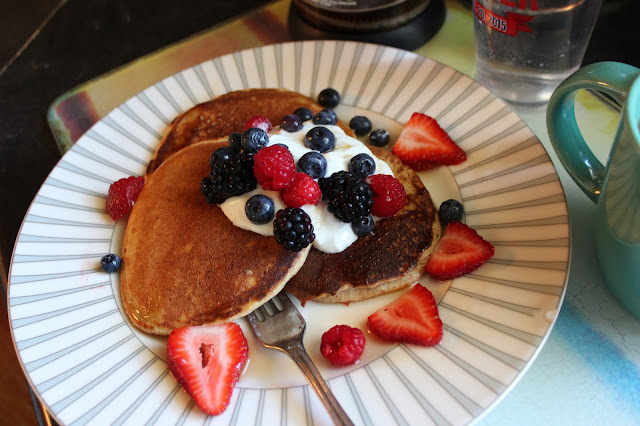 Race Morning
Sam and I headed down to the start and it was already 24 degrees Celsius. Everyone was commenting on what a 'lovely day' it was and all I could think about was how hot it was going to be for the runners. I'm a cold weather runner for sure.

At 9:15 we were off. The route reversed direction this year (same exact route just ran in the opposite direction). Runners at the start appeared confused and were all facing the wrong way. The comedic announcers were sure to divert eveyone to face the proper direction. ;)

With the horn, we were off to an immediate right turn, like 100m immediate. Then to an incline. A lovely incline where I could see my car and on the second scorching loop it was very appealing to just skip over and sit in it...lol.

I was still going to run this thing no matter what. It's a fun run to support the Navy troops and I thought I'd be pushing my legs fast so it was good training. ;) Mental strategies on the run helped big time.

During the first loop (it's a five km 2 x looped course) I grabbed a water at the first aid station and followed the guys in front of me. Big mistake apparently...lol. We were being mislead and ended up taking a slight detour (about 0.1 of a mile). I know it wasn't a big deal since it was just a fun run but some serious runners who we then met up with yelled "What the f%&k?!" in our faces. Yeah, real classy. ;)
Either way we blended in with the runners who were running along the right way, lol and struggled on. My heart was so not into this run but I tried to make the best of it. I thought it was funny that we were sent the wrong way. I thought "this will make good blog material!" See I'm always thinking of you guys. ;) 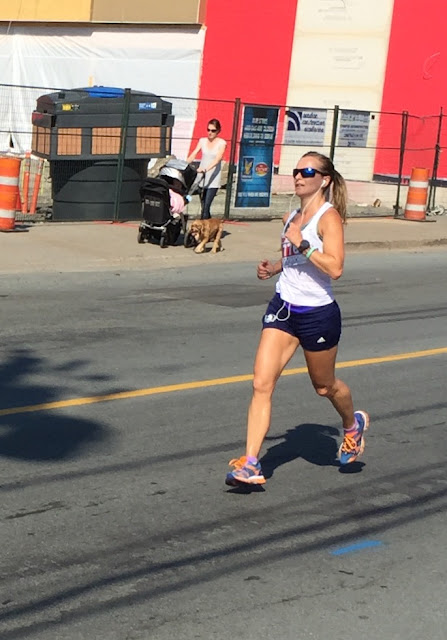 Tom was such a great photographer even though I couldn't see him! Sorry!!! I heard his voice but was trying hard not to pass out from the heat and to just finish this thing. Thanks Tom! 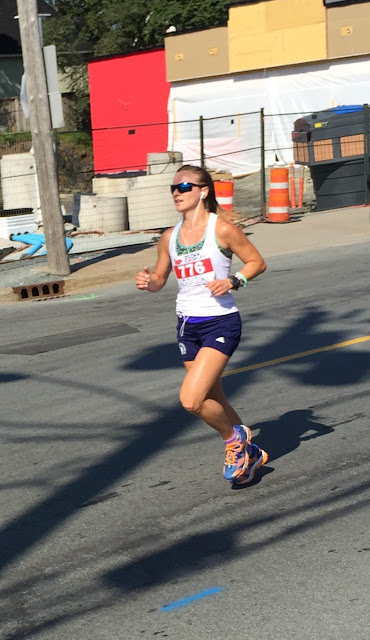 I crossed in 46:something. 7:36 avg. pace per mile. After getting my medal I headed into the meeting area. They usually don't have medals for the 10k so I was really excited about this! 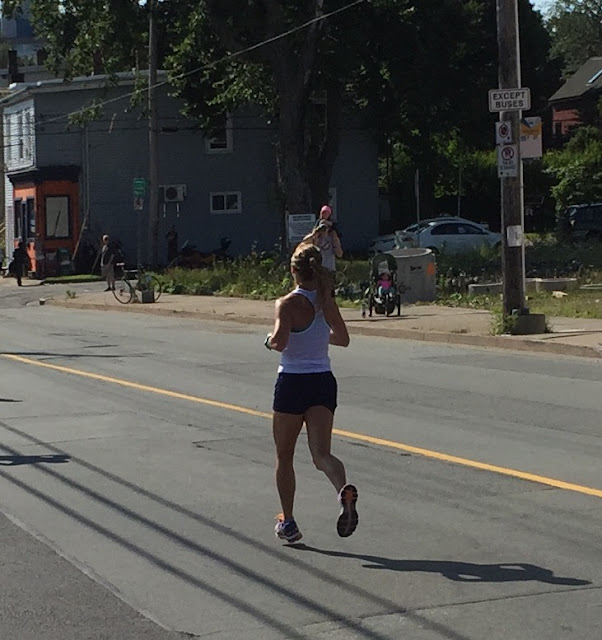 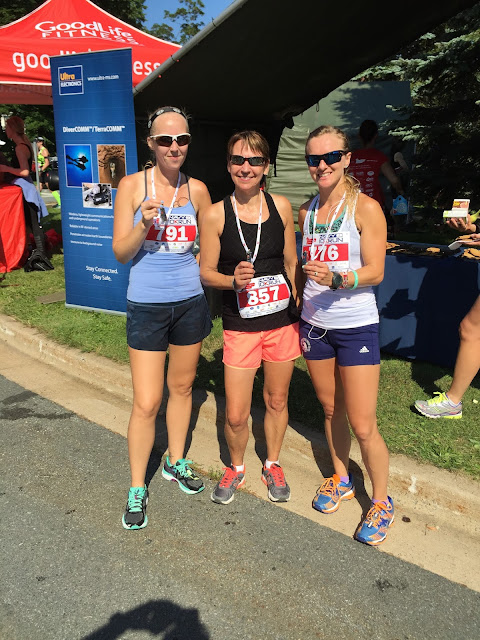 Group shot of some fellow Timberlea Runners!
The bling :) 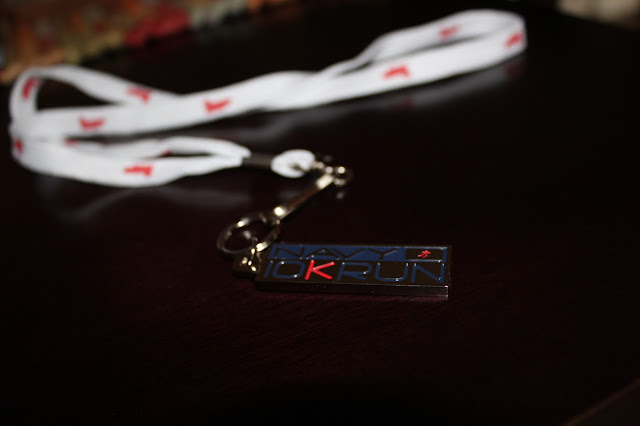 I was supposed to do a long run of 19 miles today but since I was running the Navy 10k I had decided that post race I'd head home and continue my long run along the trail. And that's what I did. :0 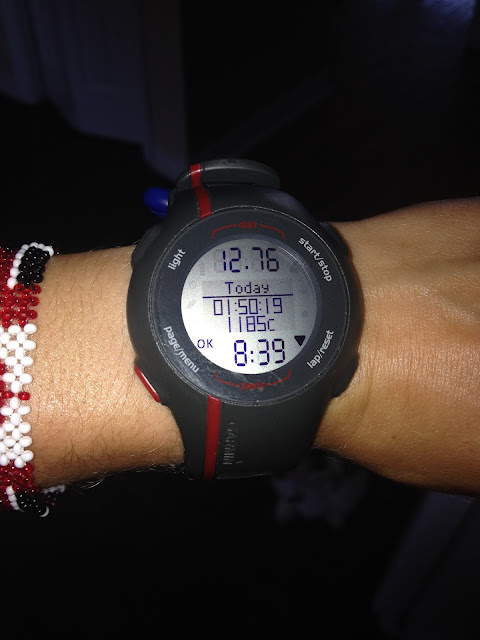 The first mile and a half I really negotiated with myself that finishing the run would feel much better than admitting defeat and laying in the ditch to nap by the storage unit along the trail. Fellow neighbourhood runners, you know where I'm talkin' about. ;) Plus I promised myself a nice cool treat when I was done.
I ran 6.25 miles at the race and then 12.75 (EASY) to make 19 for the day. I don't break up my long runs ever and am one of those people who WILL NOT pause my Garmin no matter what but I wanted to get some miles logged on tired legs especially since I wasn't speeding guts out at the race and it was Sunday RUNday! 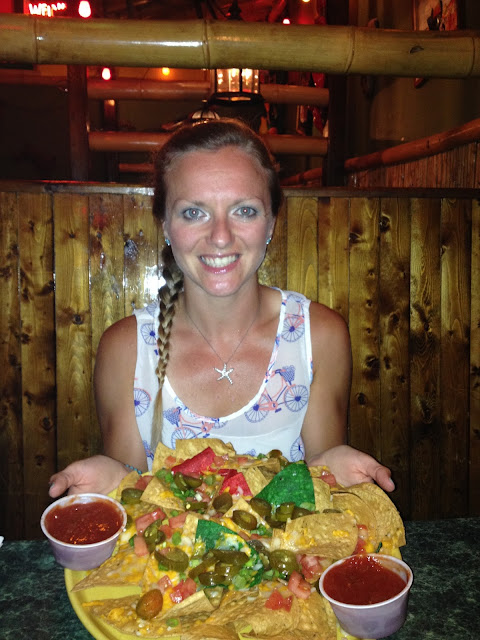 Clearly Matt and I celebrated with Nachos!

Thank  you for stopping by the GGR blog and I hope you have a sunny Monday!
How was your weekend?