I think it is awesome to dedicate a day to Running.  It is celebrated on the first Wednesday of June and you can check out more info. here!  If you use any sort of social media at all, I mean at all, you would have seen the oodles of notifications that we celebrate 'Running' today.  No complaints here! ;)
Have you ever had the feeling that you weren't doing what you were meant to do? Whether it be in terms of a job, relationship or friendship, etc.?  Or even just felt as though you haven't found your passion?  Those are some of the things I've felt in the past.....and then I found Running.  <3  Yes, I can be THAT deep.  :)  I can talk about, think about and dream about Running all day long.   I'm certain that I annoy the heck out of my non-runner friends/family/coworkers!!! LOL.

How has Running changed your life? 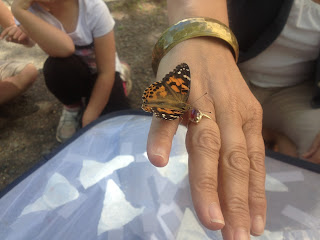 After Recess, my grade P/1 class released the Painted Lady Butterflies that we've been observing and caring for.  How much did the kids love this!?

After I arrived home and walked Lola, I got set to go run.  I wore my Boston Marathon Supernova shorts tonight.  They are super awesome.... :D  Also sporting an Old Navy tank with a side drawstring.  I am really loving their active wear tanks.  And yes, I still hang my Boston Medal in my living room.  I just can't seem to put it on my downstairs hanger just yet.  :) 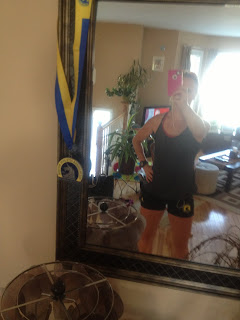 Thoughts on tonight's run:
Pretty much thought mostly about this....... 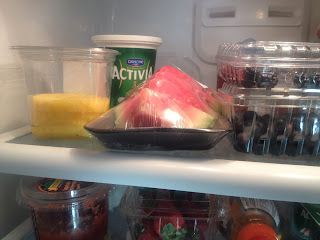 I began to get super thirsty on the run and I've told you in previous posts how much I crave things like oranges, grapefruit, etc. on the run.  Well, I knew this sweet heaven was waiting to be devoured upon my return home! :D

I also thought that as a Running Blogger, I'd have to post on a day that celebrates Running! 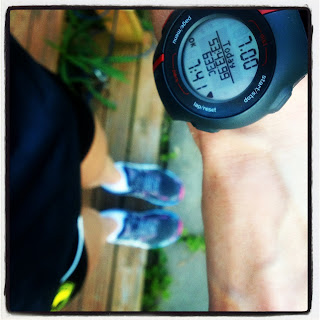 I really enjoyed tonight's run.  My first mile was in 7 minutes...yes, I know. Waaaay too fast for me.  I was just so excited to go run.  Have you ever had that urge to just burst out and run???  or maybe I'm just crazy?  I think my first fast mile was a result of  'racing' this random guy who was out running with his dog....hehe. I passed him on a small downhill and I don't think he enjoyed 'being chicked.' ;)  I could hear the pitter patter of his Golden Retriever's paws hitting the sidewalk and getting faster.  And, you know me!  I wasn't letting him pass me.  I pushed as hard as I could until finally.....he turned into the trail.  Pweph!  LOL.  I stopped hearing the pitter patter so I turned back, which I hate doing, and he was taking a turn to the trail entry. :D
Saturday's Upcoming Run
﻿
﻿So the Sole Sisters 5km Run that I'm running in on Saturday is going to be renamed (by me) as "Soggy Sole Sisters."  The weather forecast is calling for 40-50 mm of rain! Last year's Sole Sister's fun run was totally rained on as well.  Matt and Lola got sogged when I hired them as my cheering squad ;)  There was even thunder and lightning as we waited for the start horn to blow. :S  It was still a super fun run none the less.  I actually enjoy aggressively splashing through puddles, once I'm already wet. :D
Thanks so much for stopping by!
Happy Running,
Heather :)
Posted by Girl Goes Running at 16:58