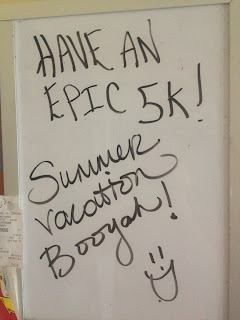 Today was the first ever Epic Canadian 5km road race.  This event usually has a Triathlon and this year added the 5km/10km runs. :)

I thought it would be a great way to kick off my Summer Vacation: getting up bright and early and go run your guts out for 3.1 miles, lol. Literally.

My wake up was very similar to Jean Paul's in Seinfeld's episode where the marathoner from Trinidad and Tobago oversleeps at the New York Marathon.  Take a look: LOL.

The video is only 2 minutes and around 1:20 is where my situation comes in!

Apparently, I did not hear my alarm and woke up to the voices of Courteney and Matt yelling my name.  I immediately  thought there was a fire somewhere and then remembered I was supposed to get up 45 minutes earlier to get ready for the race...oops! Courteney had showed up early, thank goodness and Matt was just returning home from an early run when both realized I was still warm and comfy in bed! LOL.

I grabbed my gear, brushed my teeth, splashed my face with water, took a banana and off we went! 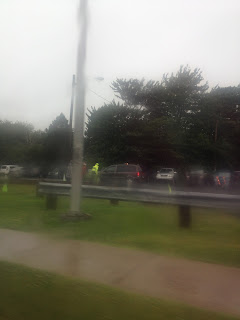 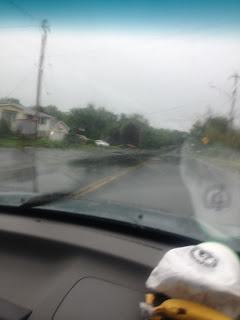 But a bit of wind and thunder showers couldn't stop Courteney and I.  No.  We're just too crazy! Lol.

At the start line, rain was pouring from the heavens.  We were soaked.  I lined up between the 4:30-5:00 minute km corrals. I was actually eager to get started since the longer we were standing there, the wetter I was getting.  I eventually reached the point of pure saturation and could feel my toes squishing in my sneakers....nice.

I suck at 5ks, just so you know. I have no clue how to pace and because it's "Just a 5k" I run until puke, literally. By 0.5 of a mile in, the rain and wind made it feel like there was hail striking my shins. I remember one hill at the course beginning and after that I didn't notice any other inclines until a suspension bridge.....which is so pretty, but not fun to run over.  It was nasty.

My body felt pretty good since I hadn't run since Wednesday.  Although after 2 miles, 3.2km, I could feel that I was running at my threshold and was experiencing the effects of the lactic acid my body was producing.  My stomach was churning....uh oh! I tried not to think about puking since I had 0.8 of a mile to go.  I spit out my gum to see if that would help. Nope.  So, at 2.3 miles, I hurled over and a few runners passed by while I barfed on the path.  So classy! ;)  Sorry to anyone who stepped in it.  :D  A kind man who ran by tried to offer me words of encouragement on his way.

When I was done, I wiped the puke off of my face and continued on.  It wasn't pleasant.

As the road makes a slight turn, you can see the big red arch......from what feels like an eternity away.  I'm sure I looked sad and pathetic as I crossed the finish line....lol.  And then continued to vomit the remaining contents of my stomach........another apology to anyone who would have stepped in it.  :)

After the volunteers trusted that I was okay, I waited for Courteney at the finish line exit.  She rocked a sub 30 min!  Then we headed to the tent to get our bling and of course, FREE COFFEE! They also had watermelon, cake and timbits!!! :D I was happy again. 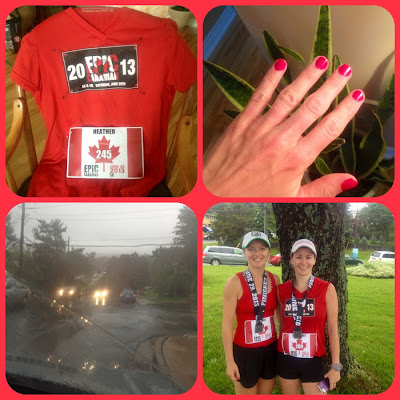 I have to give kudos to all those volunteers who stood out there in the pouring rain so that we could have a successful run.  :) 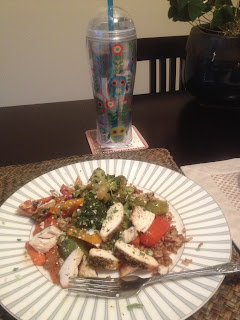 This was my pre race meal last night. Teriyaki chicken stir-fry with brown rice.  The cup is from one of my grade five girls. I love the owls and it makes hydrating so much fun! :)

So tomorrow is the Bedford 5k to Beat Lung Cancer. Who is going to call me to wake me up????