Last Saturday I got to participate in the super fun Rum Runner's Relay again! This year I ran once again with the BLT Runners on the Female team called "Tomatoes Will Ketchup." 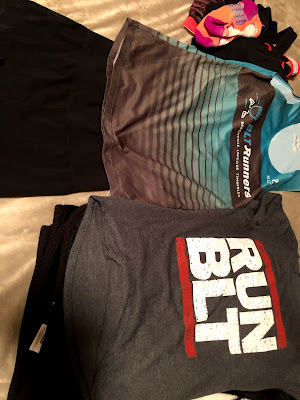 I was very excited for this run relay atmosphere. And even though I wasn't planning on racing my guts out there was a healthy sort of pressure to run well for the team, but still have fun! Last year I ran the first leg and this year I was excited to cheer at the finish of Leg 1 instead. It's a great one to do but it can be pretty dark and lonely.

There was some last minute leg shuffling due to injuries and I ended up with Leg 4. I'd never run this one but I have driven it many times cheering others. I remembered it as pretty flat and beautiful, but longish. Well, it wasn't that flat after all, lol.

Our team was also responsible for one of the water stops along my leg so Jillian made these amazing cartoons of the runners doing that leg!!!! I LOVE them!! 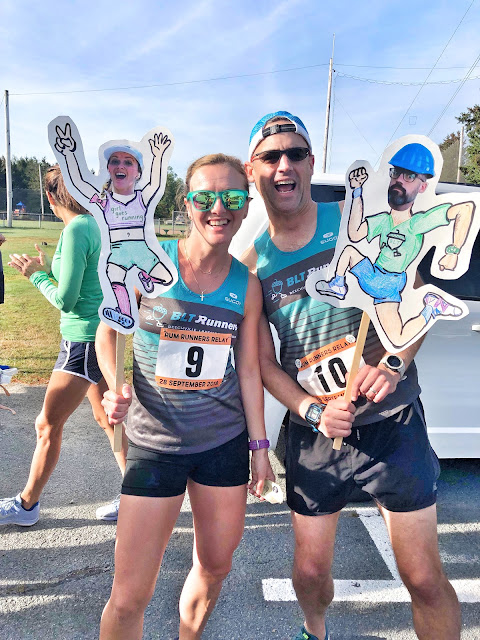 Craig and I along with Wil and Nicole were running this leg for the four BLT teams entered. Wil and I planned to stay close together if possible.

I had no idea what was in store for me after cheering on other teammates for previous legs. Everyone was running well and the weather was gorgeous, in fact maybe a little too warm for me. I like to be cool on the run. Matt was on a different team but did Leg 3 this year. He zoomed as I told him he would. That is one of my favourite legs for sure!

I warmed up with 2.5km and chatted with fellow Road Hammer teammate Whitney. She is super fit fast so I knew I'd be behind her but my goal was to try and keep her in my sights for as long as possible. This leg had a ton of fast speedy folks on it! It was inspiring. 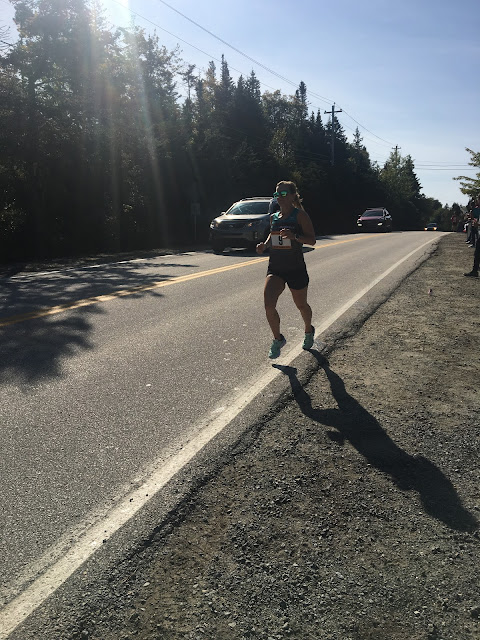 At the "GO!" we were off and I was pumped. My goal for this leg was to keep the pace between 4:30-4:40. The first km was 4:06...I'm going to blame this on the big downhill and trying to get around all the runners since we had to keep single file because the roads are not closed to traffic. 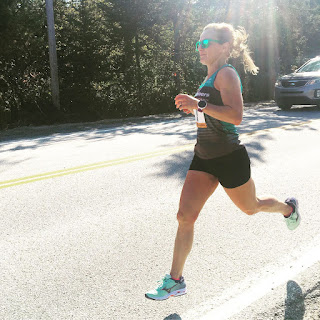 I had driven the route two days previous after school since the start line is right outside my school. I noticed three large hills for sure with some winding turns. Well, let me tell you that I noticed a few more inclines traveling the route on foot, lol.

My Summer of avoiding hills had caught up with me on this run. But that was okay. I was happy my knee wasn't bothering me and just tried to work hard for each km.

I was so thankful to see the team at the 8.75km water stop! I usually race with music but the relay doesn't allow it for safety reasons so other than the cheers from cars driving by you basically just hear your feet and breathing,lol.

I grabbed a water from Rachael and it was so refreshing! I wished I had taken two since I was pretty warm. The water station was positioned at the top of an incline so I was relieved to have a super downhill after I passed them. ;) 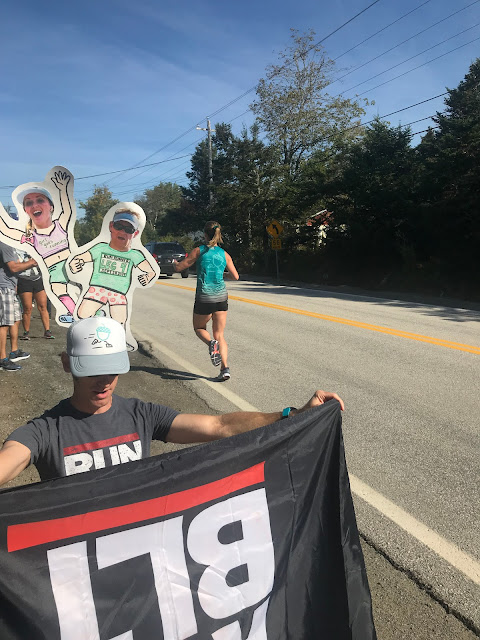 Every car that drove by and offered support, THANK YOU! It was really very motivating, especially during the times I wanted to stop because I was getting exhausted!

By 12km my legs were pretty much toast. That's when I started running 4:51s, minus that final km where I passed a couple people clocking a 4:23, lol. I know, that was ALL I had left even for the final sprint. 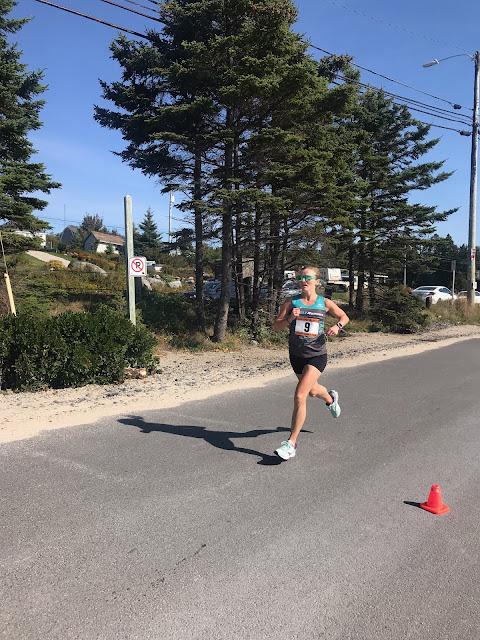 This is a very beautiful leg! Definitely my favourite so far with scenery, but don't be fooled into thinking it's flat...it isn't! 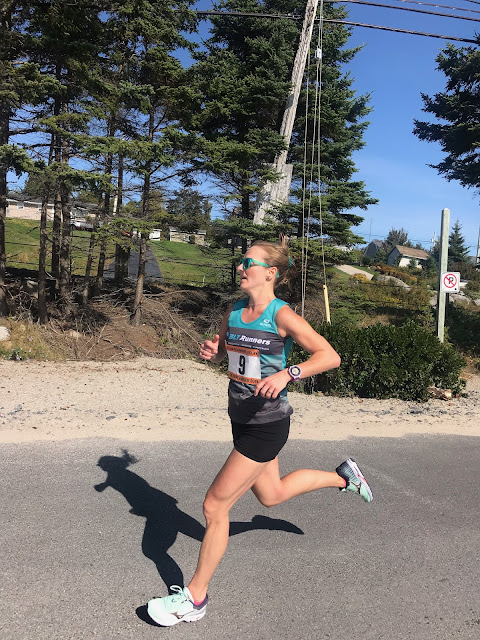 I was thrilled to see the finishing pylons earlier than 17.1km. My leg ended up only being 16.8 since the measurements are approximate. The original measurements took place in 1985 by car odometer. :)


I can't say I was unhappy with my run. I actually put forth a good solid effort and I don't feel that I got 'lazy' as I do sometimes when I'm just tired of working hard, lol. You all know what I mean! All kidding aside it was tough but I did it!

Hello ice bath! LOL. Actually the water was cold but not freezing. Either way it felt great. 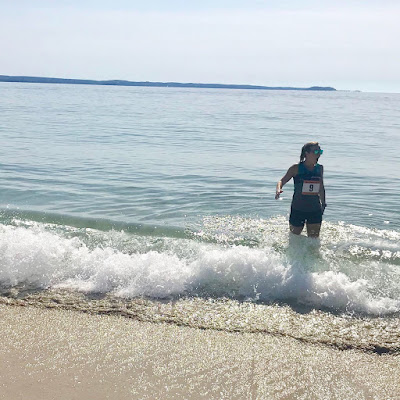 Marg, Sarah, Meaghan and I at Queensland Beach. 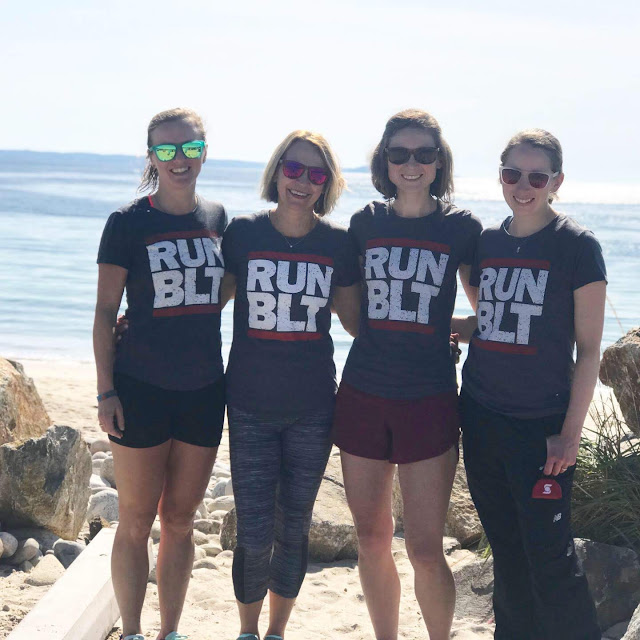 After my run I got very stomach sick which was so weird! I felt like I had just done a long run in the hot sun but it wasn't that hot really. I traveled with Tom and Marg for a good chunk of the relay and Tom fed me to help me feel better. As it turns out he makes a pretty good PB and J sandwich! :)

I also replenished my salt with copious amounts of chips...no complaints here. AND!!!!!!!!!!!! At the end of Leg 8 Sarah, Stacey and I hit up the annual Ice Cream spot. We have also made Rum Runners Bread a thing. Seriously pick some up next year! 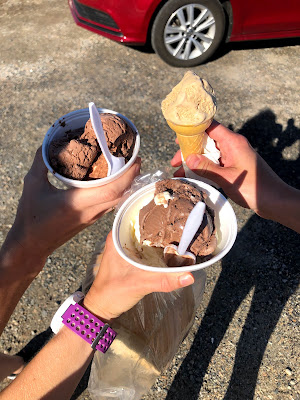 By the time we got to Mahone Bay we got to see some of the Scarecrows that everyone designed. This was my favourite. 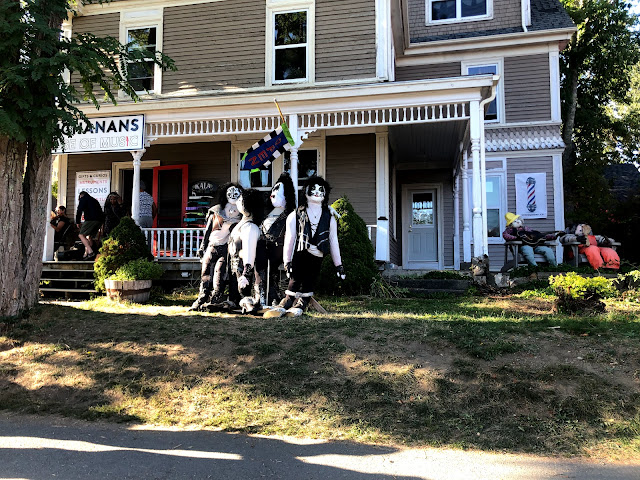 I love seeing all my running friends during this event. It's cool because instead of everyone running together you get to run and cheer for 110.4km. What a great day!

Also, I was very eager to chow down late that day when we finally reached Lunenberg! 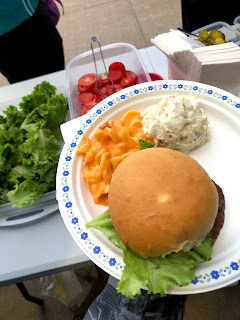 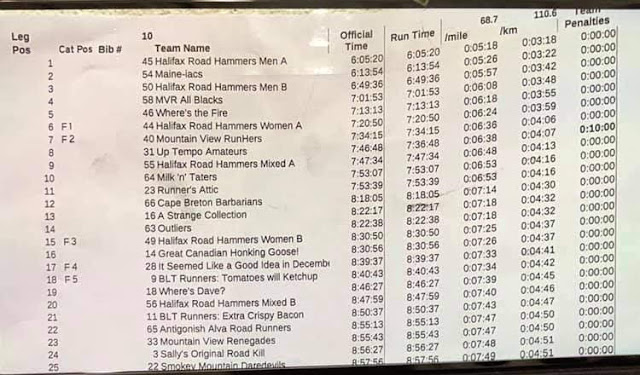 Thanks to the organizers, volunteers and my team!!!!!!! Hope to see you all next year at the Rum Runner's Relay!