Consider me inspired - exhausted, but inspired. 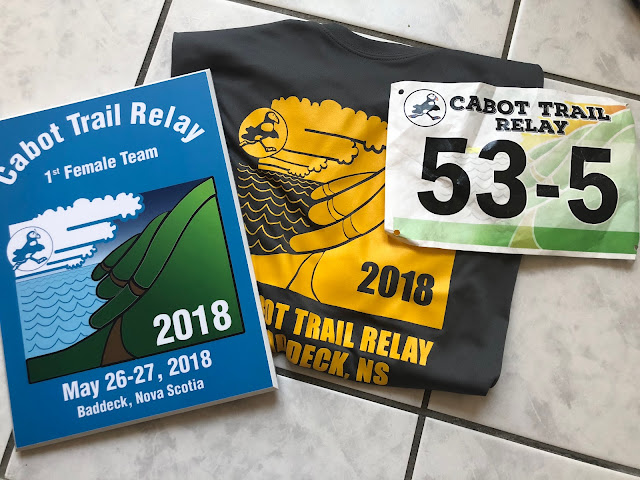 This past weekend at the 31st Annual Cabot Trail Relay the small role I played to help fill a team was actually a part of something epic! 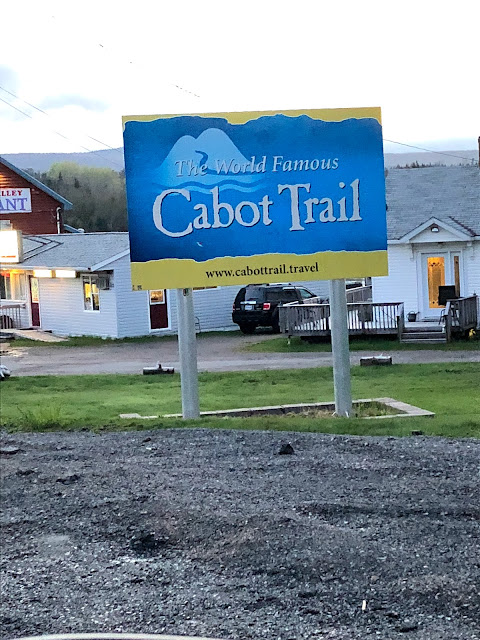 A few months ago I was invited to take part in the Relay with The Halifax Road Hammers/Women's Team. This was slightly intimidating to me knowing full well that they are strong and FAST! What business did I have running with ladies of that calibre?! Jennie was strategic at talking me into it and I agreed to take part...I'm so glad I did!

Friday afternoon I picked up Charlotte and we headed to Antigonish where we then added Hillary to the mix. My car is small, like very small. Some last minute emergencies meant a lot of shuffling for team captain Britney with legs and drivers. I ended up being a driver and I was a little concerned but it all worked out...not without some stories of course!

Friday night's stay at the Gaelic College involved a motivational team meeting with captains and then we headed off to get some of the only z's we'd catch all weekend.

The relay starts bright and early at 7:00 a.m. with hundreds of runners cheering on their teams. Charlotte and I found a ton of our friends and everyone was buzzing with excitement. The leg 1 runners were off and it was awesome!
I was not the most awesome photographer on this relay unfortunately since I was driving and frozen for the majority of the time. But here is Britney finishing leg 2! 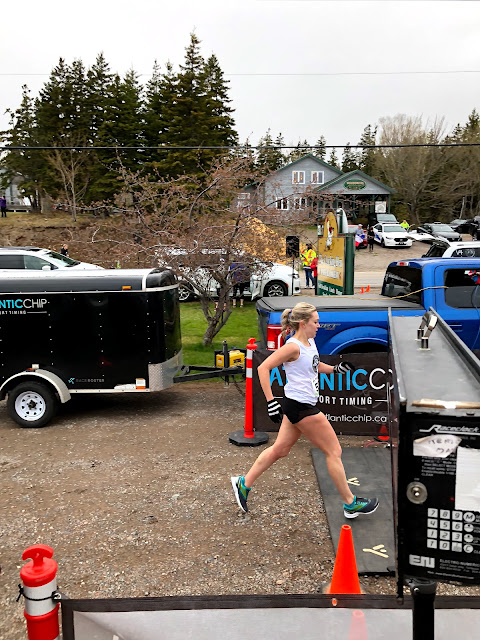 The big mission as the runners were conquering each leg was to locate a bathroom AND a coffee. I pretty much survived this weekend on copious amounts of caffeine. Everyone appeared to have the same idea.

Team "Where's My Bike?" had super awesome Pac-man characters that we saw at the finish of leg 2! They won best water stop and I saw them handing out water during my leg. It was so cool! 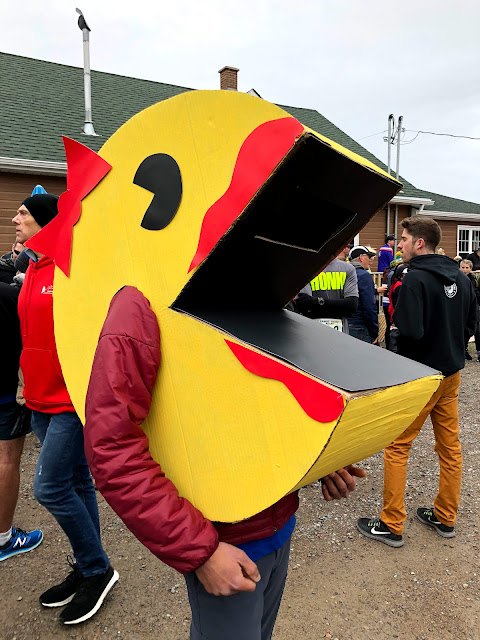 We had such strong runners on our team and actually I was so amazed by the talent all around at the relay. Runners come from many places to take part and there are many super fit and strong people there. You can check out Leg descriptions and elevations HERE!

After the completion of the first three legs the rain had definitely moved in. It was also quite chilly and the wind was picking up.

The very long bathroom lines proved to be a challenge when I tried to get a warm up in and there were strict rules on using natures rest stop. ;)

I was so nervous for my leg (5). I really wanted to do well and I wasn't sure I was in racing condition, especially after watching my teammates pull off such amazing paces on insanely tough courses!

There was no horn, just the officials yelling, "RUNNERS...ON YOUR MARK, GET SET GO!!!!!" I hit my Garmin to start and my wet cold fingers were frozen! They were stinging actually. I was glad I decided on the tall socks. 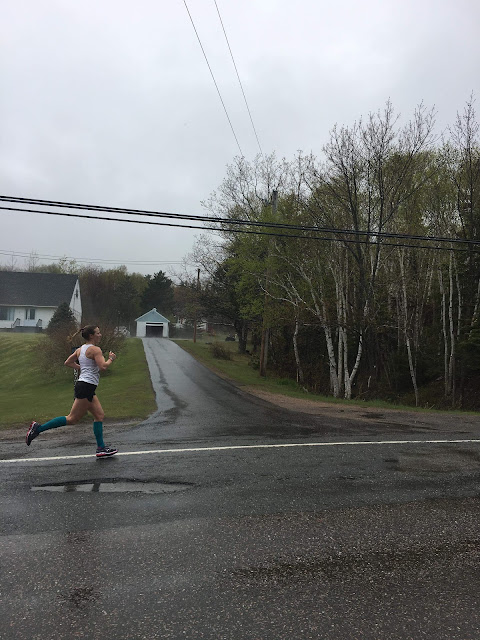 I LOVE the relay atmosphere! Once the cars are allowed to leave the start area (it's staggered for traffic control and safety based on time increments), you get the most encouraging cheers and beeps from runners of many teams! It really helps when the course gets tough. 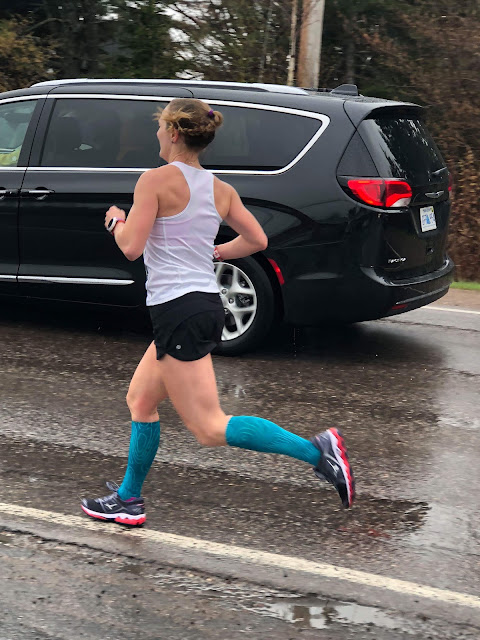 We need to talk about the brief period of rain we encountered on leg 5, Legs 3 and 4 also experienced huge downpours but there is something in particular that stood out for me.

There were mega puddles and the rules are VERY strict on stepping off the pavement for oncoming traffic...for obvious reasons. The struggle was that each time I hopped off, it was basically into a puddle or on soft gravel shoulder. Not fun.

At one point a huge white cube van splashed me and many runners and officials saw it! It was so wet and cold!!! But also slightly funny, lol. 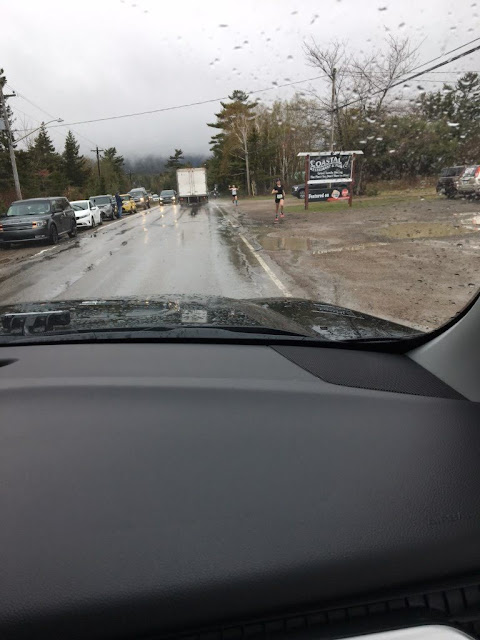 This is me in the white next to the truck...I had just gotten splashed and was giving onlookers the double thumbs up to show that I was embracing it, lol. Randal was an official and he took this photo as I got splashed!!!! It was pretty hilarious.

After pushing through the first few miles at a pretty good pace it became increasingly evident that my lack of speed work since Boston was blatantly slapping me in the face from mile 7 onward, especially on the hills at the end. I continued to grind and work very hard and I cruised at super fast paces down the final kilometre-which is a huge downhill. I finished and was pumped! 10.8 miles at 7:27/mile.

I was seeking out my team who greeted me with Gatorade and my jacket. Then I asked to get the trunk popped so I could change into dry clothes. I was now freezing! The trunk wouldn't pop and the doors weren't opening. It became very clear that the keys were locked inside!!! My only set of keys I took on the trip. Oh boy.

I was shivering like crazy and Charlotte's friend Kenzie gave me some of his own dry clothes to wear!!! #runnershelpingrunners Thank you!!!

Apparently runners are very nice people because with several of us yelling, "Can anyone break into a car???" we got no success, lol. Courtney and Hillary were quite resourceful in quickly finding a mechanic from the local Irving who was on his way home to Jimmy into the car. We all cheered!!! Oh and did I mention that cell service was basically non-existent in that area where we were locked out?!?!? 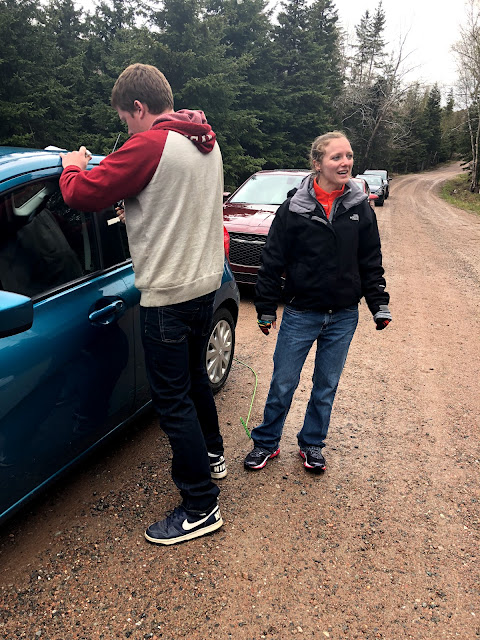 When the chaos settled we headed back out on course without barely missing a beat to cheer Charlotte during leg 6 (who by the way was not knowing of all the car key drama that had ensued). The girls agreed that a future team we'd have would be known as "Keyless & Clueless." LOL.

After Charlotte smashed her leg a hot shower at a high school and THIS FOOD TRUCK really saved the day!!!!!! I ate THIS grilled cheese burger and I thought I was in heaven. 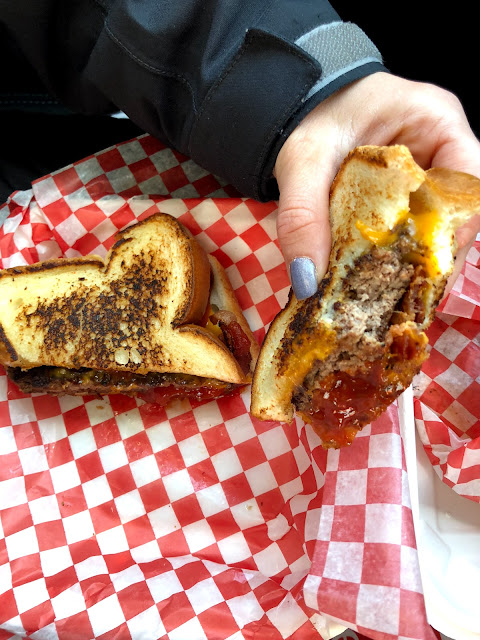 Then we got back to the super fun cheering and driving along the remainder of the daylight legs. 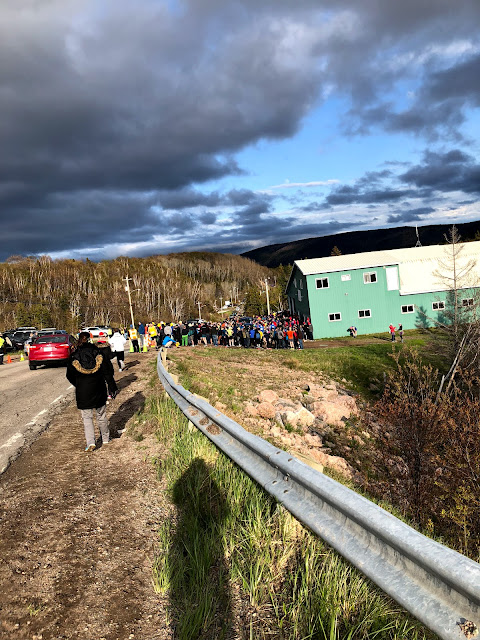 I really enjoyed cheering on legs 7 and 8...I think mostly because the feeling had returned in my body and my belly was full. :D

We cheered with some motivational messages for the runners. ;) 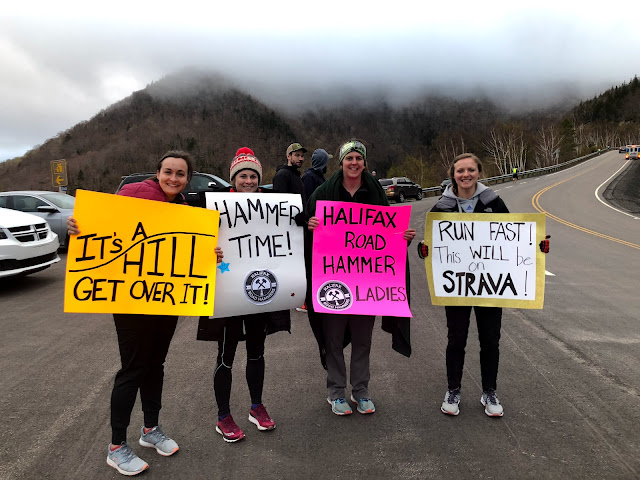 We were loving cheering the runners up North Mountain! Those guys were working hard!!!

We were now approaching the night legs. These are so cool! Runners and their crew have to coordinate sleep and driving schedules to accommodate runners running the late night sections. Hillary was going to tackle MacKenzie Mountain for us. She is a super strong runner and it was crazy cold and windy out by this point! I was terrified driving my tiny car up and down the mountains in the fog so I can't even imagine running that part. She finished second female on that mountain and we were crazy impressed! These runners receive a special photo at the banquet because the spectacular view is clearly not obvious when they completing it at night. Check it out!
Courtney was completing leg 11 and there was major construction so we had to park as they ran the serious downhill. Her leg was SO cold! When the runners finished it was very hard to locate our runner because it was dark and everyone was wearing a headlamp. The officials were calling out on the microphones to come pick up your cold runners because they were freezing. Those guys deserve major kudos! 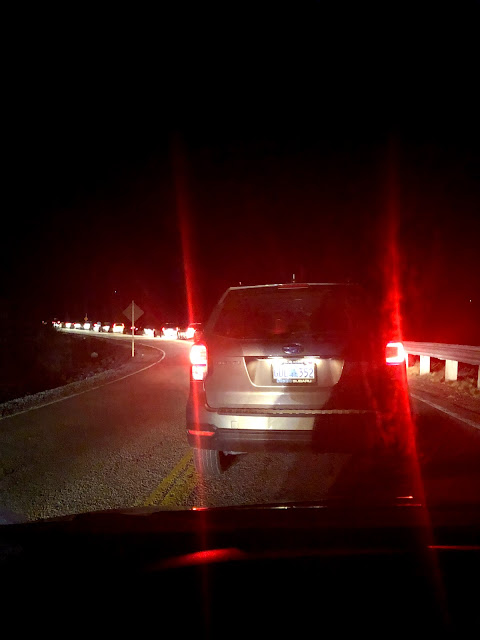 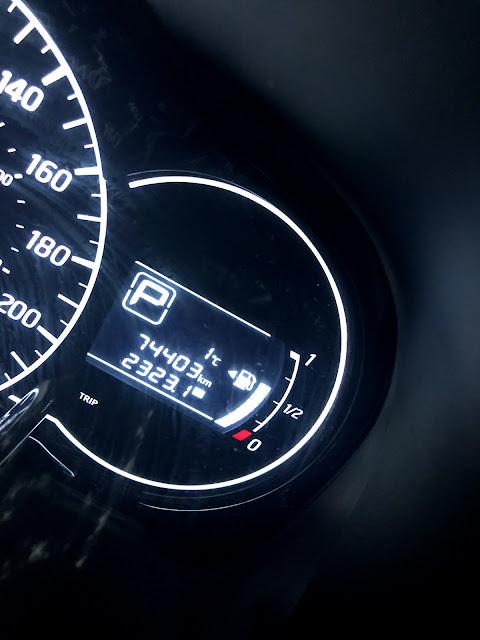 I was starting to feel sleepy after this. We filled up at a gas station and I bought a bag of sour candy to keep me awake. We pulled off somewhere around leg 13 or 14...it sort of is all blending together now and I passed out in the drivers seat for about 2 hours. I woke to Charlotte, who had a crazy amount of energy looking in the window commenting on all the wrinkles on my face, lol. Runners had just started the sunrise leg and we went on a serious coffee mission! The Dancing Goat Cafe was open and it was filled to the brim with tired runners.

The sun was out and we were sort of rested and warm. We cheered more of the Hammer Women as well as friends on other teams like Meaghan and Christy. The speed of some of the elite runners was even that much more impressive as teams tried to close the gap between themselves and the others.

We headed onward along the Cabot Trail and made our way to the start of the final leg, 17. This was so exciting!!! We were pumped because we realized that we had a bit of a lead heading in and our runner Morgan was incredibly strong and would no doubt finish the job. It was crazy exciting!

We waited in Baddeck under the sunny skies for a very exciting finish for the Halifax Road Hammers Men's Team as Matt Mcneil finished to secure a much sought after win!!!

And we soon discovered that the Women's Halifax Road Hammers Team were also the female champions when Morgan cruised in! It was incredible. We finished the 185 mile/276km relay in 21:01 for 11th team overall out of 70!

We ate lobster at the banquet and received awards as a team - so amazing! 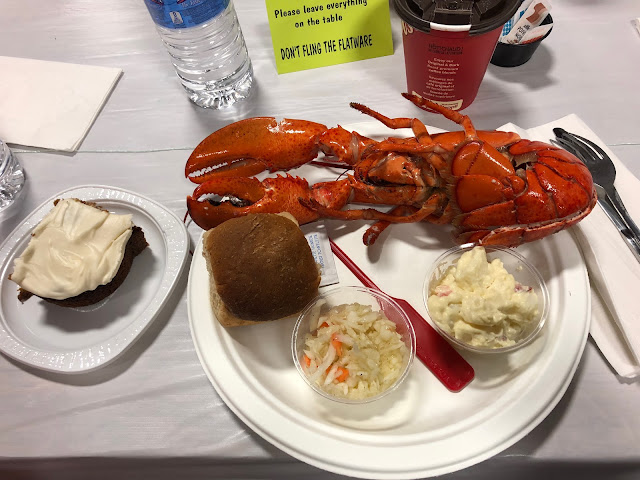 We each got a plaque! 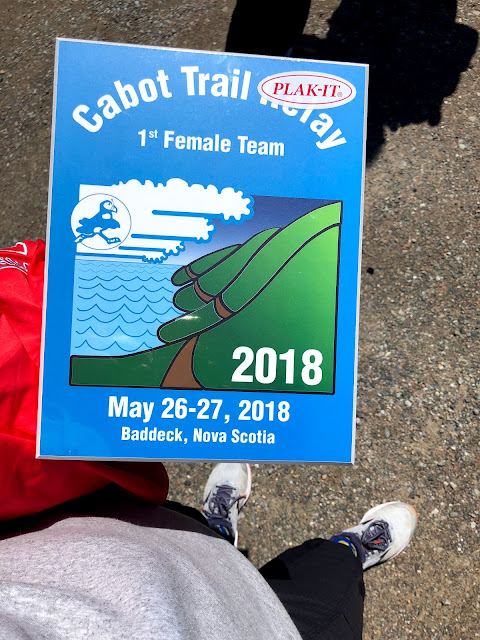 I had the most fun this weekend...even with being wet and locked out of my car, haha! 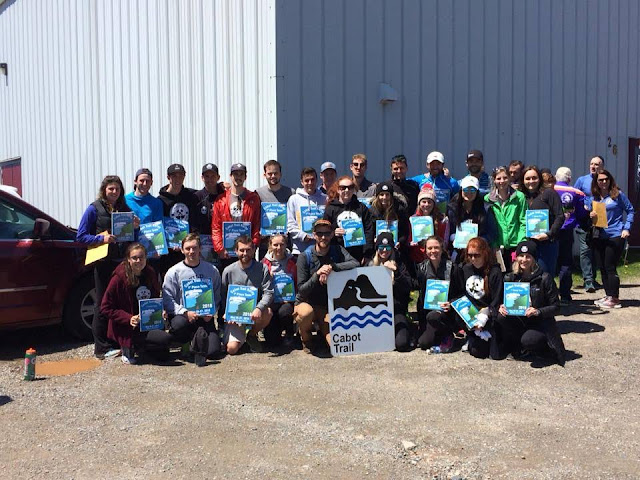 This weekend has motivated and inspired me to train even harder and I am so grateful for the opportunity to be a part of an amazing story! Thank you Halifax Road Hammers! 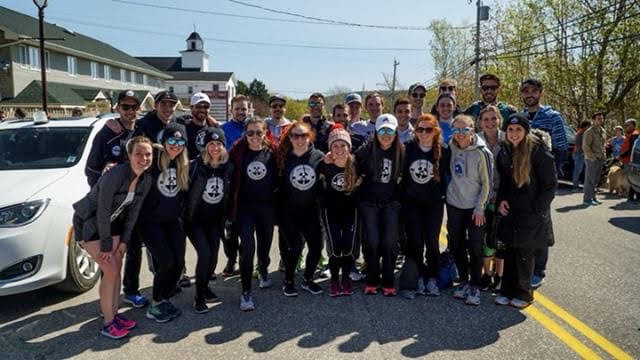 Congratulations to ALL the runners and a huge thank you to the amazing volunteers at Cabot this past weekend!!! I hope you stayed tuned in until the end and if not well happy running anyway! ;)

Thanks for stopping by the GGR blogspace and have a beautiful day!
Heather :)
Posted by Girl Goes Running at 19:16