I hope you've had a great Victoria Day long weekend!!!! It was mostly sunny skies here in Halifax but no matter what the weather an extra day off of work is always welcomed. ;)  AND it was Bluenose weekend here in the city!!!!!!!!!!!!!!!!!! 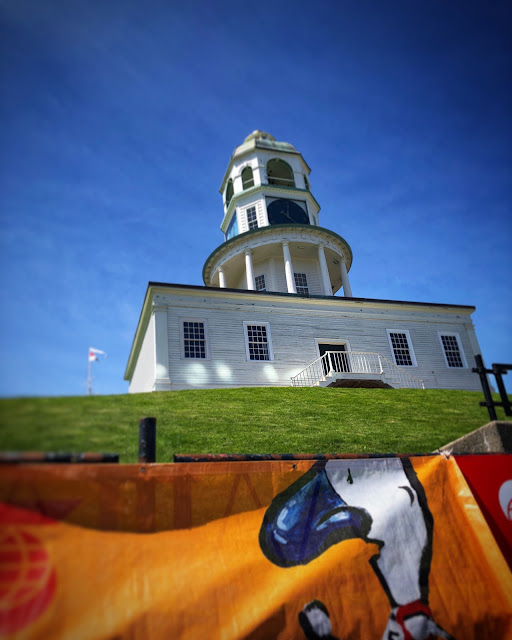 There are many amazing races around here in the spring and fall, but The Scotiabank Bluenose Marathon weekend draws out approximately 11000 runners! Wowzers. :0

On Saturday I headed down to check out the kids in the Youth Run. They are amazing! It is seriously cute to see them shuffle up the hill to the finish and how they carelessly slosh the water cups in any direction at the water station, lol. I managed to meet up with two of my first graders and their families for some post-race high fives and photos. They were so pumped to show me, Ms. Callaghan (their teacher who always talks about running) their medals. <3 It was so cute.

I came home and laid Flat Bunny Heather out on the bed. The race was calling for rain and the horrible flashbacks of Boston came running through my head...just kidding. I knew we would not turn to runner-sicles as we did a month ago in Boston. ;) I did however get a garbage bag, just in case from Marg when I was at her house.
Lola says, "Hmm, actually no. Are you leaving me here...again? To run?" <3 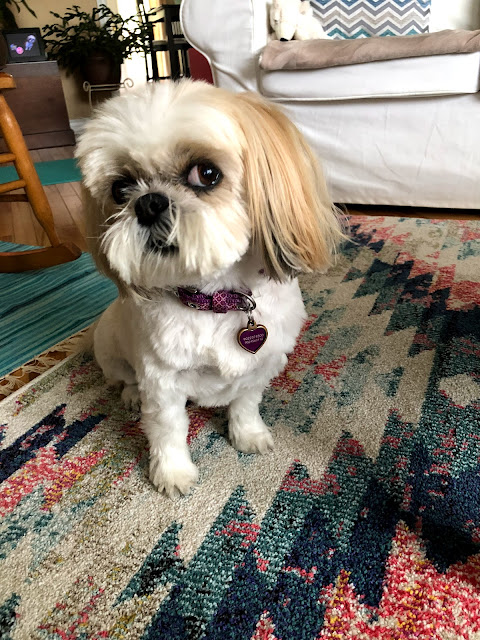 Marg and I headed downtown early to meet up with John from White Rabbit Pacing to get our pace signs. We also saw a ton of our friends!!!

Some friends even got photos. :D Thanks Michael! 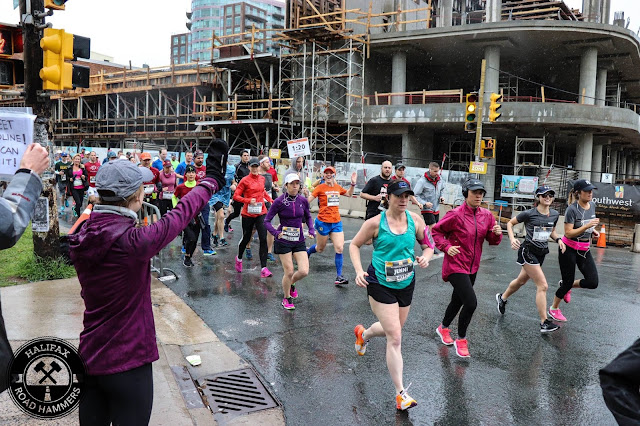 We only carry the signs for a bit more than a km and then we ditch them in the barrel at the first water stop.

A lot of runners told me they wanted to hang with me at the start line: I was the pace bunny for the new race 15.3 km in 1hr 20 minutes. This pace was comfortable for me and the route was quite challenging.

Mother Nature cooperated for the race thank goodness! I didn't want it to pour from the heavens, especially for the marathoners. They had a big day and we could all use some good running weather. 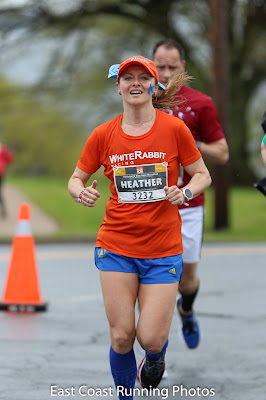 Tim Chesnutt snapped this photo of me in Dartmouth as we were cresting a serious hill and I could not help but notice how he is usually at an unflattering part of the race for me, lol. In Boston he got me at the top of Newton Lower Falls and here at Bluenose heading up the hill back to the bridge. Just sayin'.

The guy in the red shirt behind me stayed with me until the last 2k. He finished just a few seconds, maybe a minute behind me but he said he got under his goal time!

I knew the route would have some tough sections because the 15k headed over into Dartmouth which at least meant the bridge...TWICE, plus Nantucket hill and ANOTHER huge hill after that...boy! There was some super sweet downhill after that where we ran down a trail into the Lake Banook area. It was gorgeous! There was a kayaking group going on there and all the runners were running around the lake like some scene from a super cool movie. ;) I also saw Kendra in this area and she was pacing the marathon!!!!

The weather was great and we all chatted about how thankful we were that it was perfect running weather! There was an occasional pocket of humidity that was annoying but there was a bit of a breeze too so that was great.

As we turned down Ochterloney Street the wind actually became a bit of an issue. It actually made my hat lift a bit and I had to tighten it. I was thankful I did not have the pace sign with me! I told the runners around me to also be grateful since I predicted that someone would have lost an eye!

Heading back over to Halifax was tough for many runners. The bridge now had a mega headwind and is a huge incline in itself. Most runners drifted back from me here but one of the two that stuck with me the entire time was right next to me. He had never run further then 12km and this was very tough for him but he had grit and would not give up. Plus I was yelling at him, lol.

Right before the finish you go down a crazy big hill and then up another incline. I saw most familiar faces there including Michael, Corinne and Charlotte. They had sweet signs and took awesome photos!

I saw Stacey a little further up with her kids and she caught me finishing. Can you see me??? Well just to the left of me is a guy in black pants and a red t-shirt. He worked so hard!!!!! But he did it and was psyched at the finish. :D Pace Bunny win! 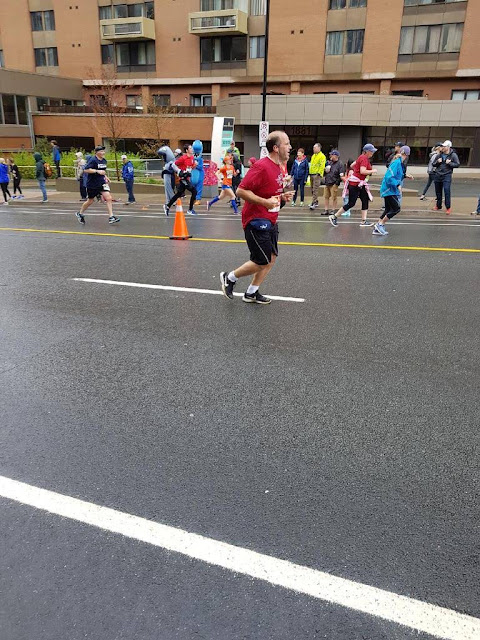 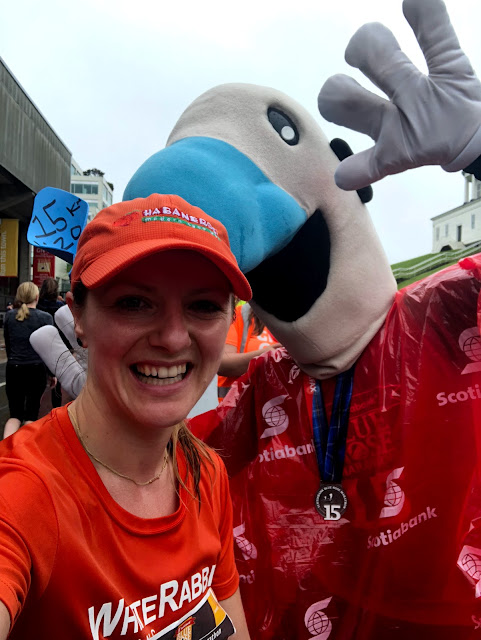 I saw Matt along the course once on the bridge. He was running the 10k and finished in 38 minutes winning his age category on a super tough course!

I headed inside to hunt for Marg. She paced the 10k so was long done! 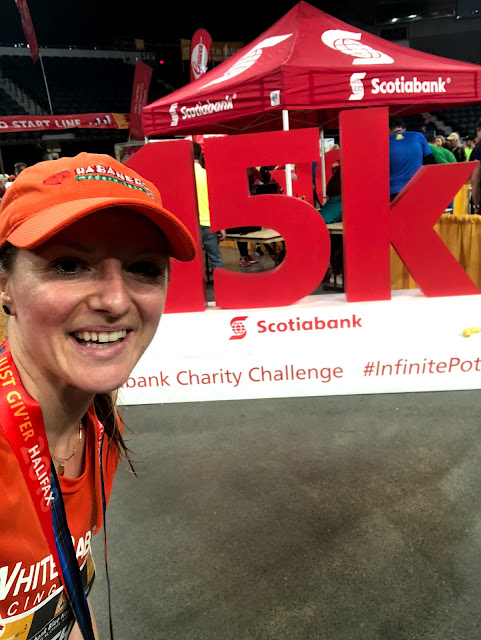 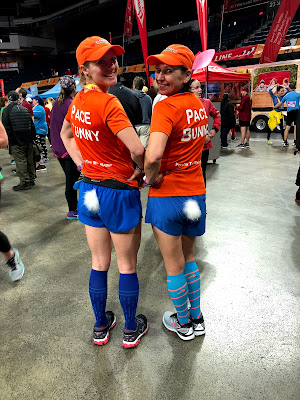 Post race run ins with friends are the best! Everyone is always so cheerful and chatty not nervous and intense, lol. 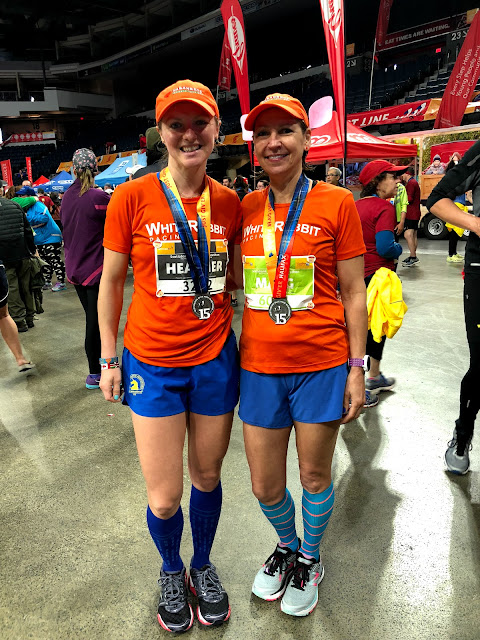 I even got to see a pal from the past, Janet! Janet and I did our very first run together back in I want to say 2007! We felt like rockstars that day on the trail. <3 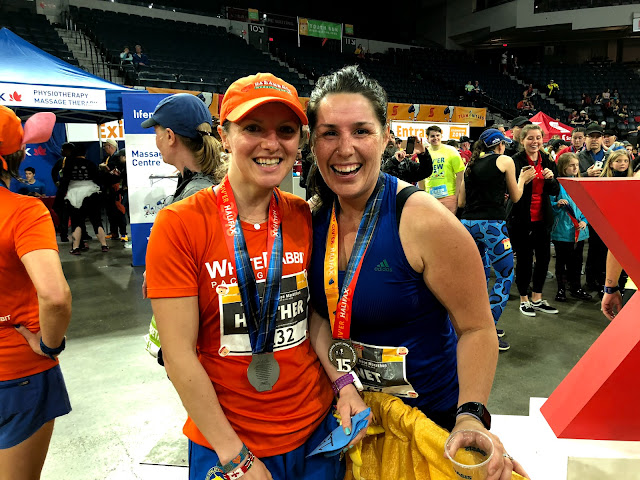 I love that they gave the Bunnies bling! 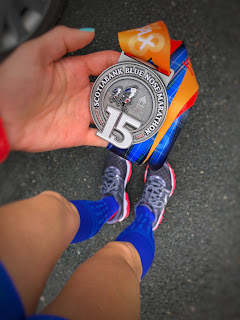 Can we just take a minute to appreciate the cuteness of this Bluenose fan??? Seriously xoxox 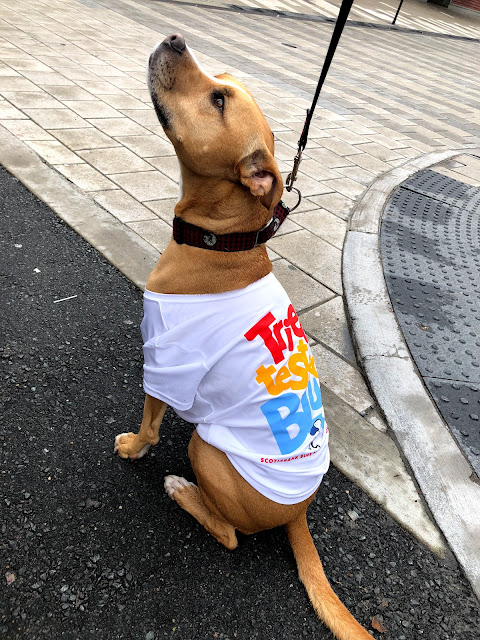 Here's some elevation in case you're interested! I am definitely sure you do not care about my cadence...lol. 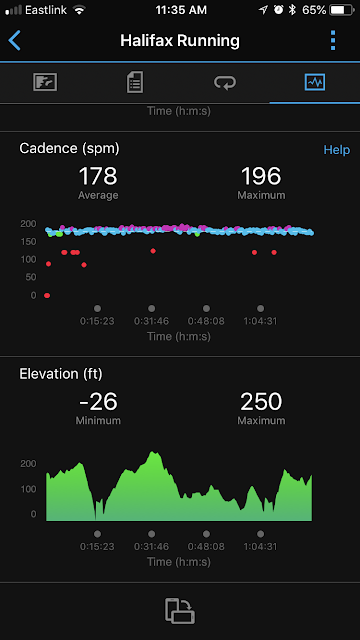 If you're looking for fun with a challenge the Bluenose is your bet. Awesome spectators and volunteers, even a bagpipe band! Band? Group?

Thanks to White Rabbit Pacing for having me!

Next up is the Cabot Trail Relay Race in the Cape Breton Highlands!!! I'll be running with the Halifax Road Hammers Women's Team!!!! I'm sooooooo excited. :D :D
Did you run the Bluenose????
How did it go???
Are you running the CTRR?

Thanks for stopping by the GGR Blog on this sunny Sunday!