I'm back home in Nova Scotia and boy was the Tely 10 amazing this year! 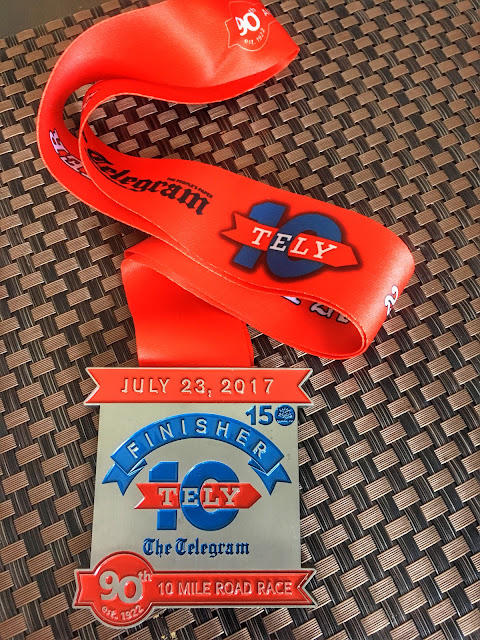 Here's my version of the story ;)

Race eve and Trudy asked what we should have for dinner. She has a very cool mixer so I suggested a Pizza!!! I used to shy away from pizza the night before a race but now it's like the more the better, you know? 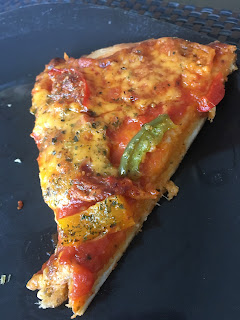 That night I laid out Flat Heather at Carla's house because she lives much closer to the start and in the morning she would drop me off. 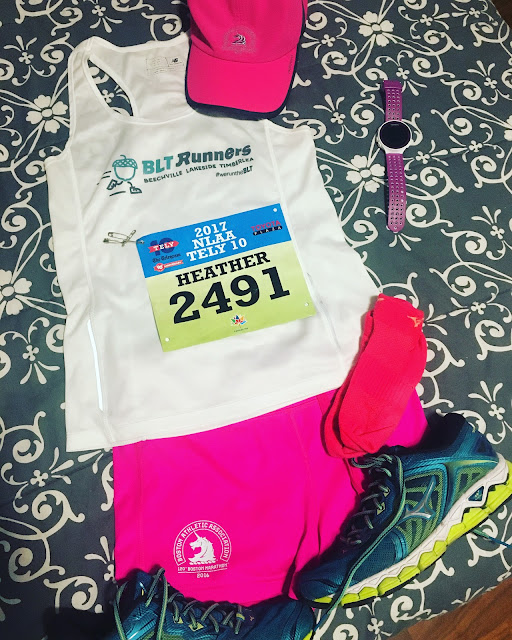 I was so worried about wearing my compression socks and being hot but in the morning when I checked the weather I was pleasantly surprised! 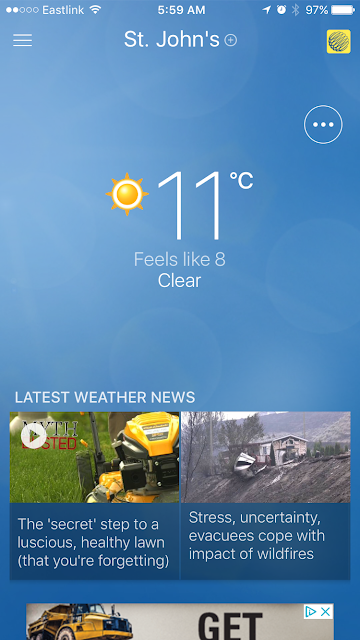 So it was decided! 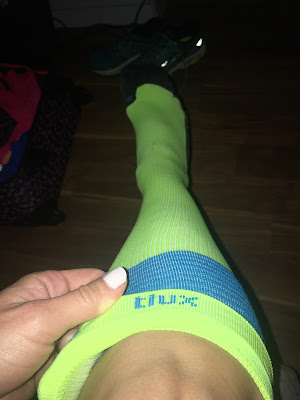 I ate some oatmeal for breakfast and I was later reacquainted with it at the finish line, but we'll get to that later. Be thankful-you're just getting the verbal version. A group of not so fortunate volunteers got the up close and personal one, LOL.

Carla dropped me off far enough from the start line at around 6:45a.m. that I was able to get in a good 5k warm up. That may seem like a lot but I do best at shorter distance races once I've had a really good slow warm up. I tend to get a serious side stitch when I neglect this part.

I was only in the starting area for a minute or two when I saw the BLT Runners!
We all headed up to the start and then I saw Greg G. and later Christine! My nerves had settled a bit and then when we sang the Ode to Newfoundland I was ready to go!

During the first mile I was cautiously running around a 7:05-7:10 minute mile. My race last year was an average of 7:16 per/mile and my strategy was to run each mile slightly faster than that, but go by feel as well so I didn't crash in the end.

I had serious self-doubt heading into this race. I don't know exactly why but I feared not being able to run as solid of a race as I did the previous year. I had not changed training plans and I had a sub par Boston Marathon and Ottawa 1/2, both because of heat. So I had basically lost a lot of confidence. Matt told me that I was being silly and he knew I'd do well. He always predicts my race times but doesn't tell me until it's done! When It comes to racing I am my own worst enemy.

As in previous years my family was at the two mile marker. I always zoom when I see them partially from adrenaline and wanting to look strong and fast for them and also because of the first stretch of downhill. Oops, 6:46 mile! 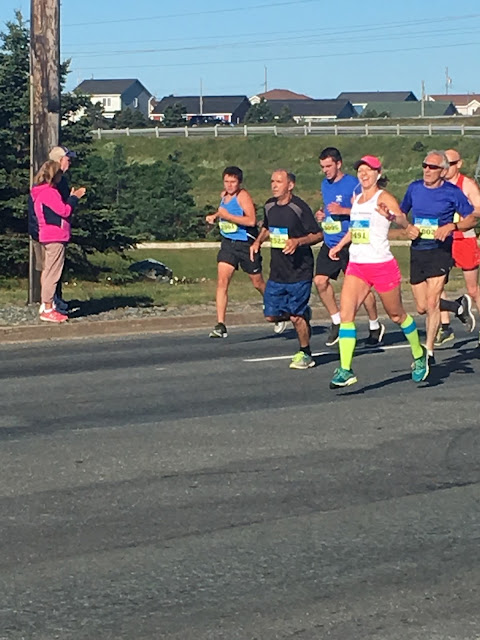 The air was much cooler than I'd trained in and it felt wonderful! 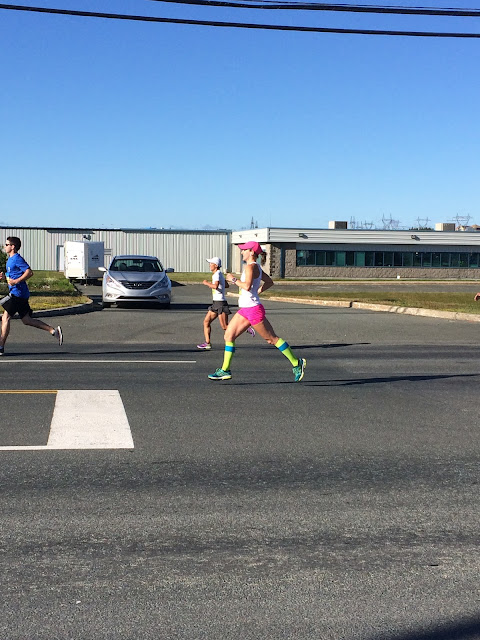 If there was one word to describe this race it would be "focus." I kept telling myself to concentrate on my stride, form and pace. I was feeling really good and there was no reason I couldn't have a great race today. And quite possibly a PB?

I LOVE the huge downhill between miles 4-5!!! At halfway I was at 34:47 and was like whoa, that's fast for me! I'll probably pay for that later.

Craig had mentioned the greatest elevation loss kms at the start and mentally I was keeping track as I cashed in on them. I knew miles 7-9.1 would offer some change of elevation but for now I was focusing on the mile I was in.

Again there were bunches of spectators offering praise and encouragement to the runners. At each hydration station I'd sip on water only. Not too much because a lot of liquid combined with fast downhill running ALWAYS gives me a side stitch.

When Mile 7-8 arrived I predicted a sea of runners pulling ahead of me. But that wasn't the case. We all took the incline as a cohesive unit and it was actually pretty cool. There were messages of encouragement for runners written in sidewalk chalk and it made me think of how much my students this past year loved using that stuff. :) Mile 8- 7:24 (20 seconds faster than that mile last year).

The fire stations had their hoses out along with some neighbourhood residents. I watched runners seek a brief moment of sanctuary under the cool water. I was shockingly comfortable still.

As the miles ticked off I continued to run by feel and had run 5 of the first 7 at a sub 7:00min/pace!!! Then I started crunching numbers, which is probably what I was doing in the below photo taken by Tim Chesnutt, lol. 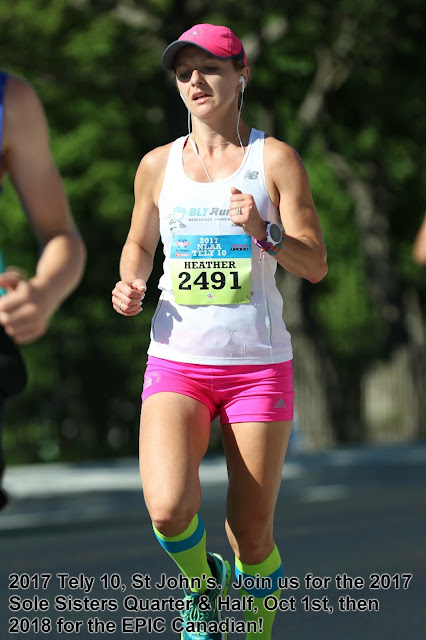 At mile 9 you crest the inclines and I took one last water, which turned out to be yellow Gatorade. It was a nice surprise to find that sugary liquid in the cup at that point in the race. 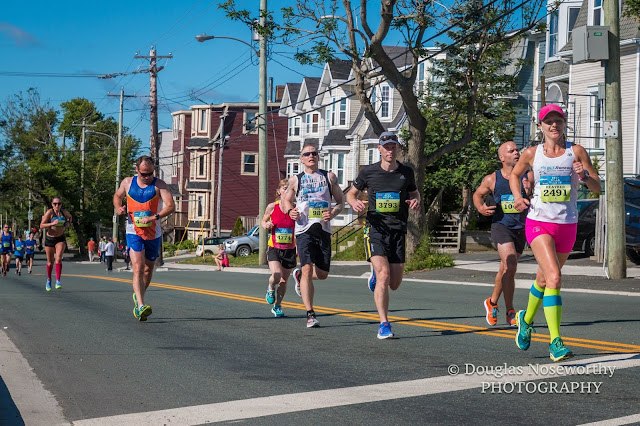 I had one mile to go and I was going to gun it! I gave it my all blazing down that steep hill at the end...glancing down I saw the Garmin reading "5:38/mile!" LOL...yeah that was crazy. I caught a glimpse of my family to the right where they were last year and my legs felt like noodles. I felt puke coming and as I made the sharp left towards the finish I started dry heaving. My pace slowed to a crawl but when I looked up I saw 1:09:XX and was stunned that a sub 70 minute Tely was in reach. I fought to get in under 1:10 as I tried to ward off puke. 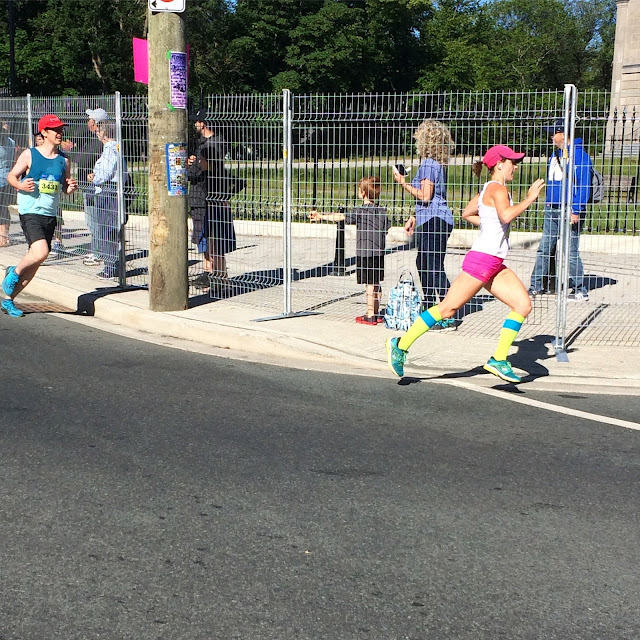 Eye on the prize! 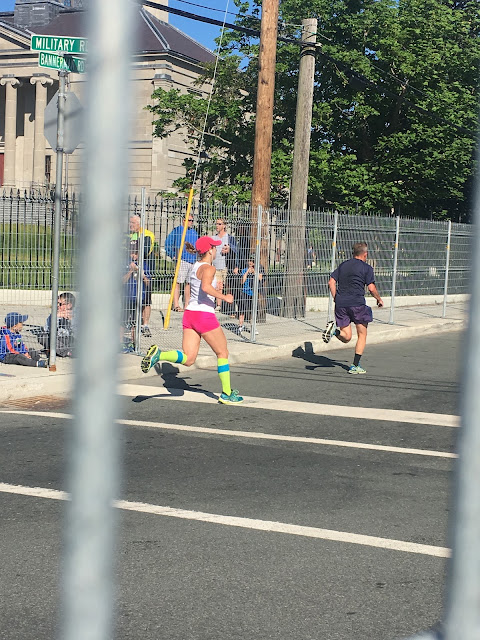 Craig was waiting by the medals and shortly after we were met by Christine, Stacey and Scott. Everyone did amazing!!!!!! 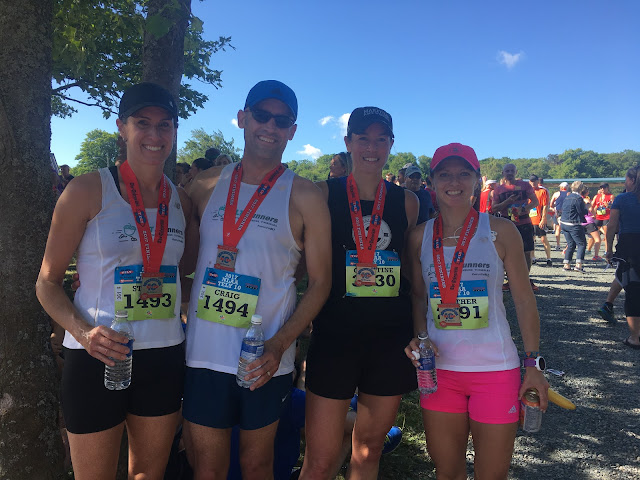 I had my annual photo with Janice-my running friend from NL. 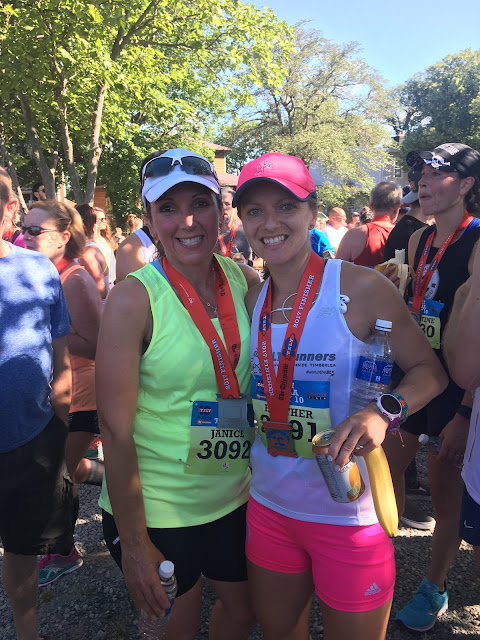 And Leon who I hadn't seen in forever! 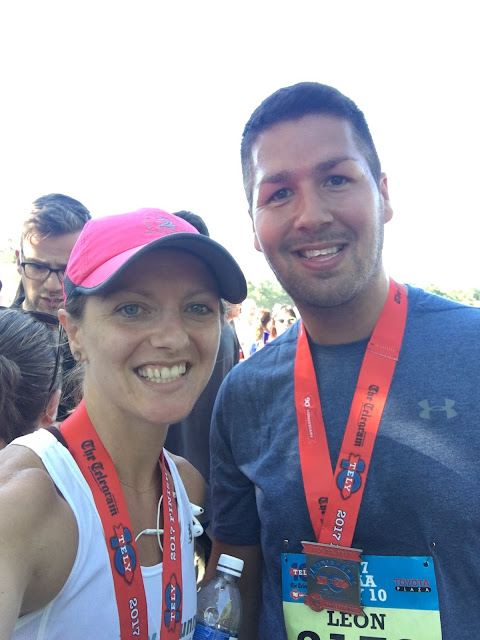 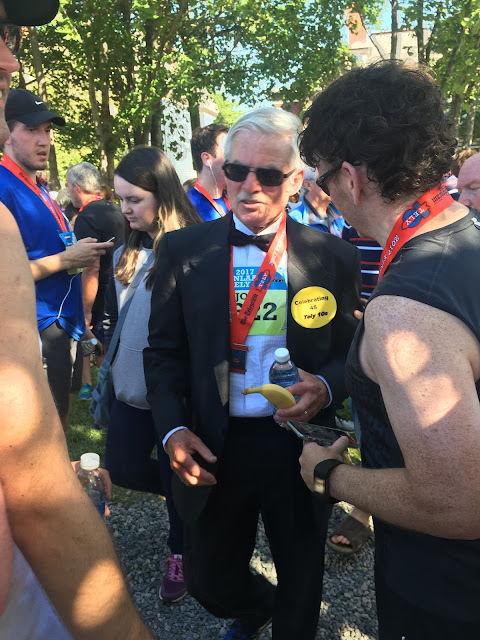 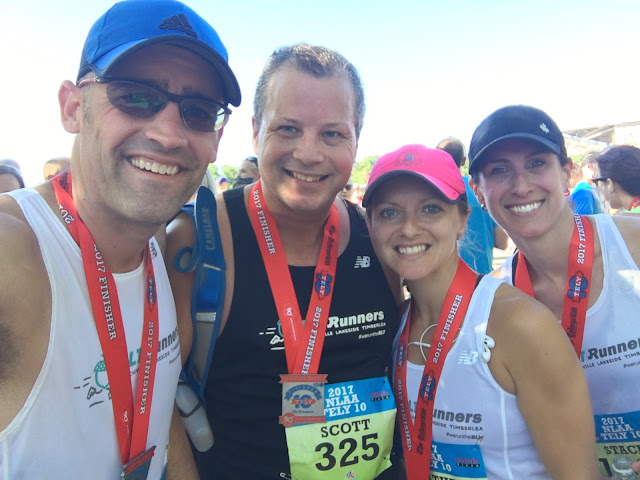 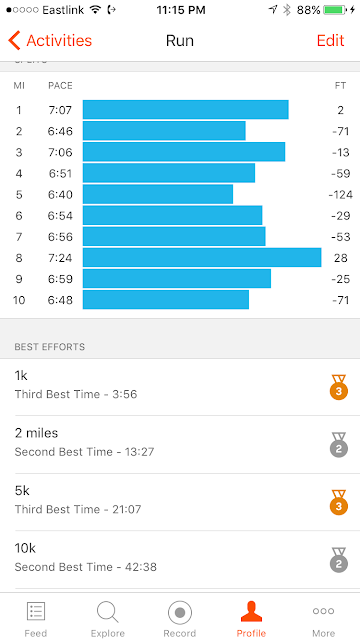 I managed 18 seconds per mile faster than last year with a 3 minute PB to the very second. :D

Carla, Trudy, Dad and I headed to Signal Hill for some photos before heading home. 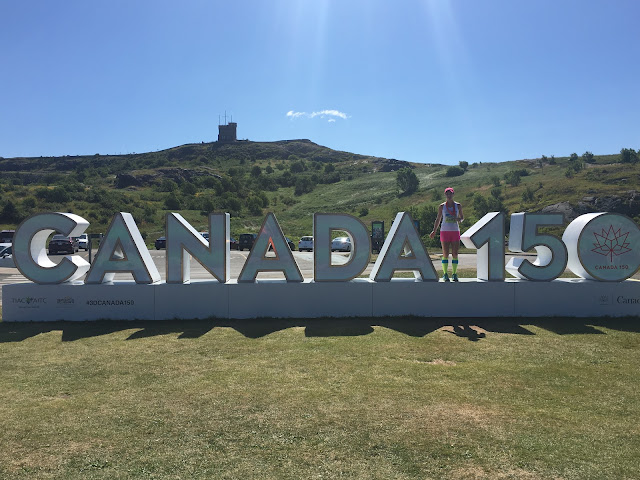 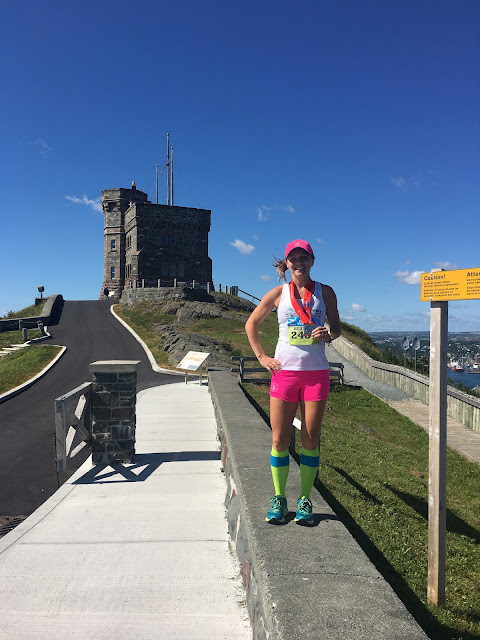 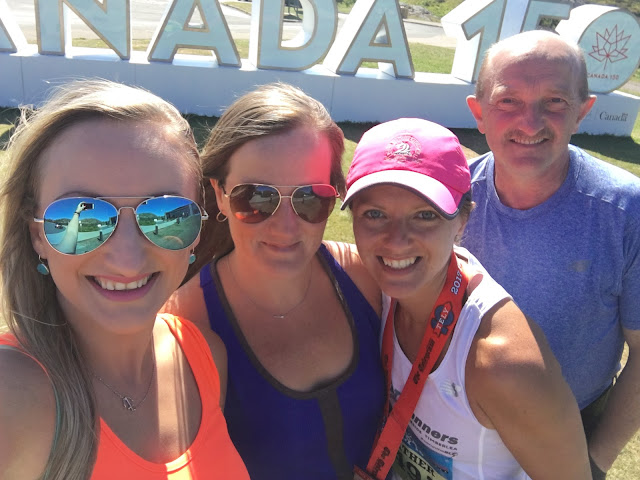 Still in disbelief that this is MY time! 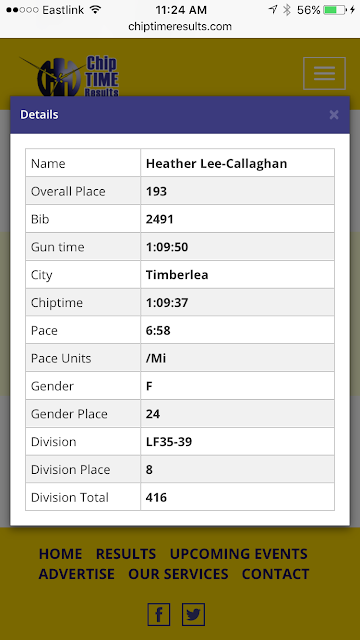 Post race celebrations with the sisters and running friends at Jack Astor's on the Water Front. 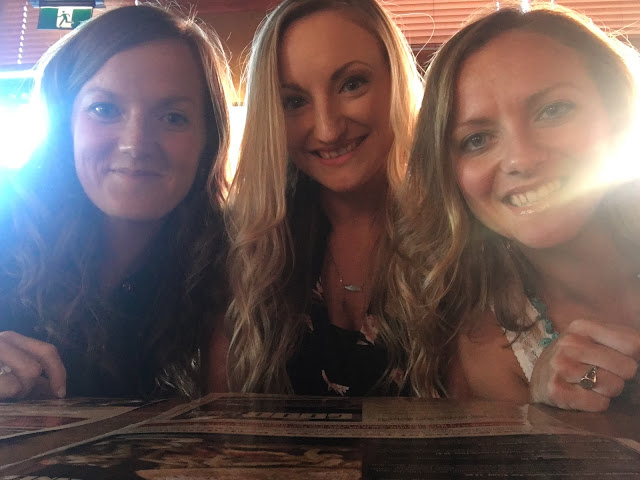 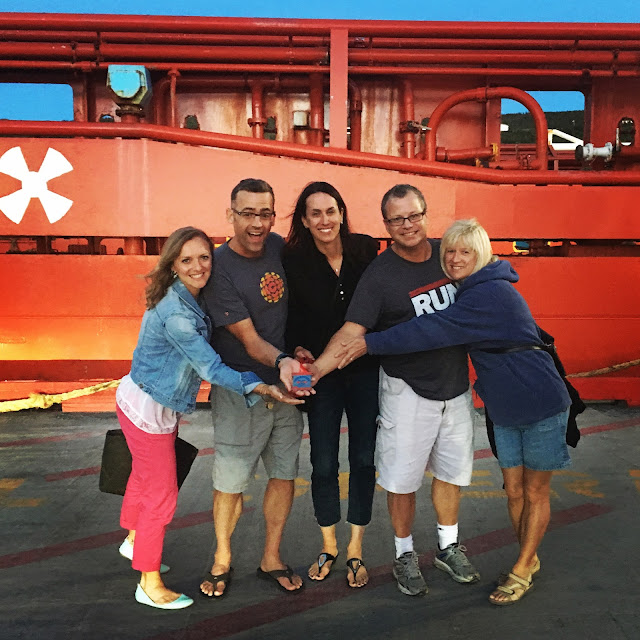 This was such a great race for me. I love when the stars align and go beyond your expectations. It doesn't happen often so when it does it's truly amazing.

A HUGE thank you to Mizuno and tiux for decking me out in top of the line gear! I am truly grateful!!!!

Thanks so much to my family for trucking me all over the place on the weekend and feeding me delicious food! Thanks so much to Matt for taking care of Lola while I went home and offering moral support. <3

Congratulations to ALL the finishers and another huge thanks to the volunteers!

I hope you stayed tuned until the end and if you did, Bravo, because that was long! Thanks guys, I love when you stop by the GGR blog. :)

Email ThisBlogThis!Share to TwitterShare to FacebookShare to Pinterest
Labels: mizunoruncanada