Every September my body receives quite a shock to the system with the (what feels) abrupt return to school and teaching 20 little busy bodies each day, peak mileage in marathon training and of course my favourite racing season of the year, Fall.

I basically go from sleeping until being woken by my body clock and not my iPhone alarm, running whenever I feel like it, napping, Netflix binging, eating all day long and gardening to full out full time working and training. For me it's definitely an adjustment but somehow I manage to survive, lol.

This past weekend was the awesome event Maritime Race Weekend that I really look forward to each year. I've run it each year since it's start back in 2012 and have had nothing  but great things to say about it.

This year I decided to take my training in a different direction with Project PB. Greg designed a plan for me to help me hit my goal of a sub 3:30 marathon in Chicago and I have to admit when I first read it I vomited in my mouth a little. Some of the workouts really scared the heck out of me! Matt and I get psyched up for our Thursday workouts, since they are usually the ones that make me die a little inside. The term VO2 Max sometimes makes me wake up in the night with cold sweats. ;) (I kid I kid). But in all seriousness, it's really pushed me out of my comfort zone and into a new level of training and strength. I'm sure at Chicago I won't be pulling off any 30 min PR's or anything but I do at least have more confidence in my ability to hit my goal in the marathon. We will see! Anyway back to this weekend's Run Fest! <--- Okay, am I the only one who thinks this would make a great name for a race event???

Basically the point of the long ramblings above are to say that I was heading into MRW with a goal to run all guts out Friday night for the Sunset 5k. My previous 5k PR was 21:27. This would be tough for me to break since I train for long distance and usually suck at the shorter races. But I was determined, tired from the first full week back to school, but determined. ;)

So I wanted to look 'Pirate-y' but didn't really have anything Jack Sparrow-esque. Lynda came to the rescue since she went to Disney when Pirates of the Caribbean was released and let me borrow the neat head thing-a-ma-bob. There was also a fake telescope and knife (that was actually bendy). I contemplated running with the fake props but they actually announced at the start that there were to be no fake weapons so that decision was easily made. :)

The girls all took part in the traditional pre-race photo shoot and of course none of us really remembered to bring shades...even with the words SUN SET in the title, duhh lol. I think I was more focused on remembering my eye patch!

I was also super excited because my Newfoundland friends and my aunt came to Nova Scotia to take part in the event!
I was so freaking nervous for this race and I had a bubble of water in my belly during the warm up Jennie and I did that I could actually HEAR when I ran....how weird is that?! We ran 4.8ish km as a warm up and took advantage of the on-course port-a-john where there was not a single other person waiting to use it unlike the race start area, yikes!

Matt and Lola came to cheer and I gave Lola some snuggles before we headed out. <3

At the sound of the canon we were off and the tight start reminded me to start close to the front even if I had no business being there. I took off with the crowd and was running close to the speed I'd do a stride and I was like "Whoa Nelly! Slow the heck down!" Race adrenaline really can get the better of you, and then you have to battle the good ol' "Fly and die" phenomenon that the undisciplined runner is prone to, not that I have ever done that, LOL (cough cough).

I needed to hit sub 7 min miles to PR and actually not just by a couple seconds, by like ten or so...gulp. I absolutely hate checking my watch on the run, but I did it seventeen billion times during the 5k distance I'm sure. There is even photograph proof! 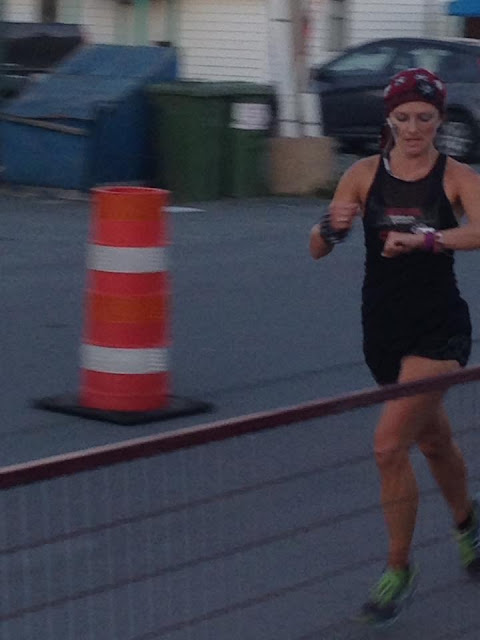 At the turnaround I could hear "Go Heather" from several friends, but couldn't actually see them since the sun was blazing bright into my face. I was giving everyone I heard a thumbs up though. Jennie was rockin' second place and I thought if I can just keep her in my sight (far ahead but in sight) then I can definitely push myself to reach my goal. At 4k I was sucking air for sure and fighting vomit. My belly was churning since I was really pushing pace. And oh look, a photographer, lol.
Matt and Lola were waiting for me at about the last 400m and I couldn't even wave I was concentrating so hard on not puking!

The red digits were counting up to 21 minutes at 20:44, 20:45, etc. when I was approaching and I sped up to hit 20:57! My first ever sub 21 min 5k!!!! I couldn't even get excited because I basically fell over the fencing and barfed on the ground right in front of the spectators. Oops.
Just love the loot! 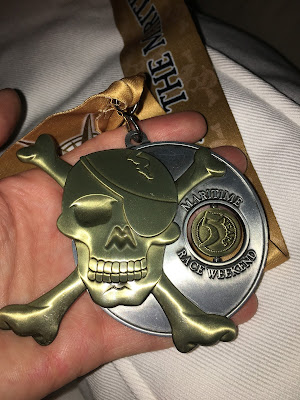 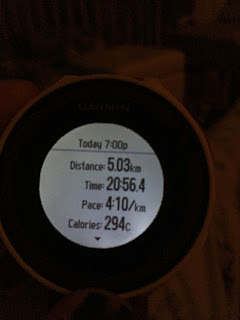 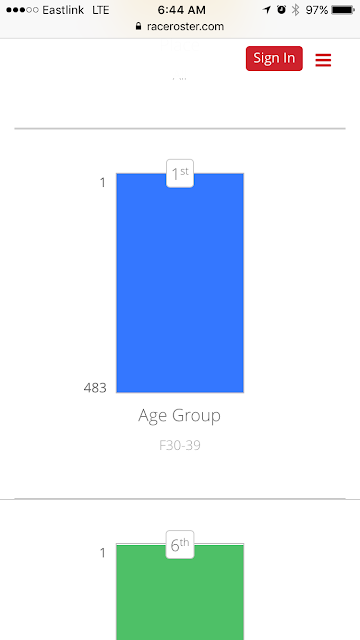 After fuelling on some Habaneros tacos the girls and I headed home to rest up for the Sunrise portion of the weekend where I was a pace bunny for the half marathon! 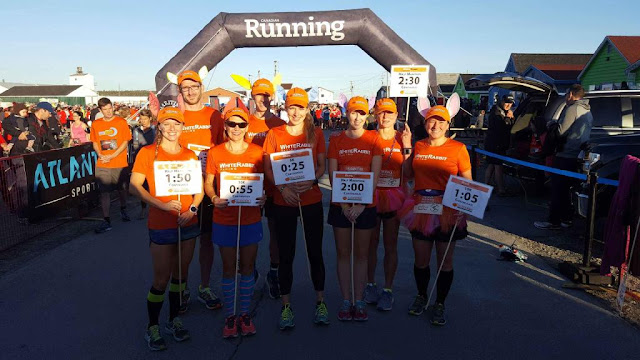 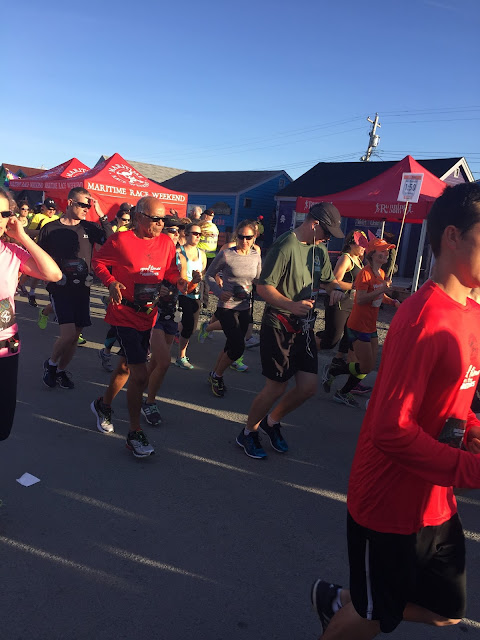 I told you I had a big crew! Thanks for the shot Maurice! 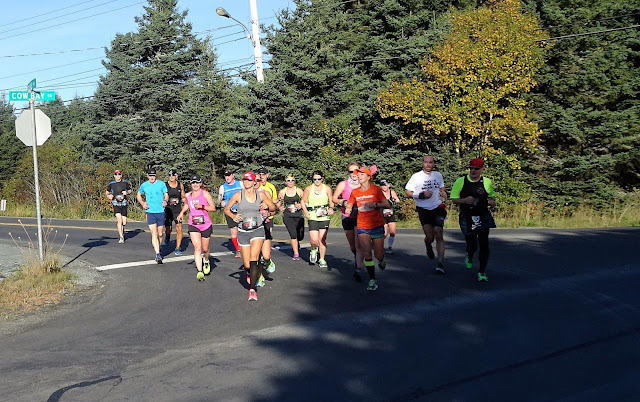 Pacing is super fun and also a bit nerving! I was so worried about going too slow, too fast, etc. Thank goodness for Hughie and his praise during the run. He was using km and I was using miles so it was super helpful to hear the conversion and of course his reassurance that I was doing a good job. Please give him a huge congrats for scoring a shiny new PR!!!
We got so excited each time we saw a photographer and I was sure to warn everyone to smile when I spotted them, lol. 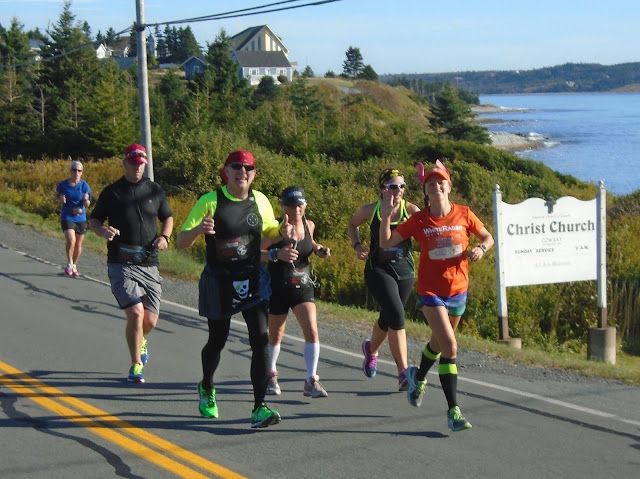 On another note I hope you are taking in all the beautiful scenery around the runners here! This route is gorgeous!

There were runners with me for a good chunk of the race. They conquered the rolling hills of Cow Bay and rocked the pace. The group dwindled down with about 7-8k to go. I told Hughie I wanted him to sprint ahead of me as we approached the finish but he insisted on finishing together. It was so awesome!

Post race Jennie and I did a warm down of about 6k to make up some distance for the day since I was switching long run day. Then I found Aunt Brenda in the crowd!!!! She rocked her 10k! 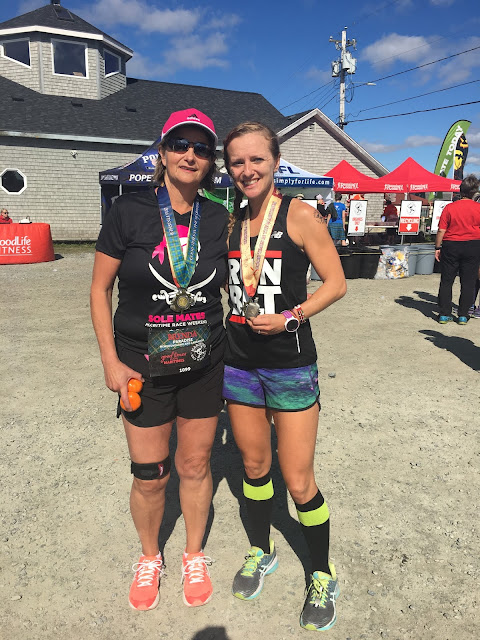 Huge thanks to Michelle and the MRW crew for having us pacing and for hosting such an incredible East Coast Event! Thanks to Durwin and White Rabbit Pacing for having me! And obviously a mega congrats to all the racers!!!!

I hope you all had a blunderin' awesome weekend! Arrrgh! ;)

It's been so long since we chatted, share anything with me!!!!
Next up is the Rum Runner's Relay next weekend! I'll be doing Leg 3!