My Year in Running....It Sure Was a Good One!

You knew it was coming: A complete Recap of my year in running and my premier year as a Mile-Logger-Blogger!

Tempo Tune
And of course, it's going to start out with a Tune. :) I am very thankful that Matt listened to my Christmas Wishes and got me the new Arcade Fire Album. You must listen to their hit "Afterlife." It's A-mazing and perfect for this post! Enjoy :)

Now the tough part.............summarizing an entire year's worth of running/reflecting into one post!

2013 has proved to be a year that would keep me on my toes and keep me guessing. So many surprises. I have been brought to tears of joy, triumph, pain, terror, devastation and glory, all through the eyes of Running.

I have run a total of 16 races this year. I'm pretty certain that's the most I've ever run. Three of which were of the Full Marathon Distance. There were also 3 half marathons in there. ( The Blue Nose, Marathon By The Sea and Maritime Race Weekend ). The other 10 races were a combination of 7km, 8km, 13km, 16km and 5ks. What: Not ONE 10k?!?!?!

Check out my loot! 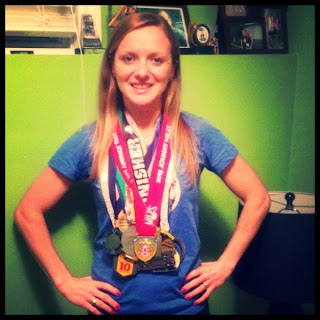 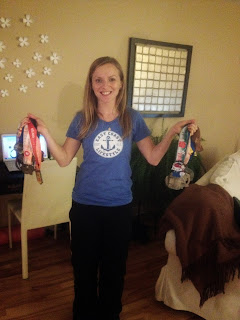 I started the year with guns blazing in January to begin my Marathon Training adventures for the Race of a Lifetime, the big one, in none other than the Boston Marathon. I lived and breathed training for Boston. My training regime was pretty steady and I barely missed a beat. With the exception of a chest infection mid training cycle that caused me to miss a total of 9 workouts. But by then, I had built a solid base mileage. I would just have to continue to train for the race without the fine tuning and strength I had hoped. I ran a pretty decent time even with a pit stop to the medical tent at 10.5 miles to get some blister care.

It sure was a day I'll never forget: One of the statements made by the announcer at the start line in Hopkinton said, “You are the Stars today!” A line that gave me shivers of excitement then and became a stark reality a few short hours later. Instead of the congratulatory phone calls and messages I would have received, I got fearful ones from my family, friends and coworkers. All wanting to just hear my voice, read my words or know that I was safe. The disruption of cellular service made communication impossible. Being close enough to feel the rumbles from the explosions in my stomach as I exited the medical tent has left me with the ability to relive that day anytime I close my eyes. But I am a Marathon Warrior and I have moved forward.

I look very much forward to Boston 2014. 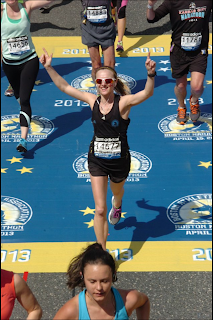 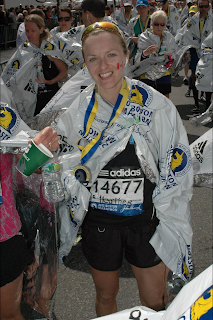 Big Contacts
A facebook message from Mr. Hal Higdon resulted shortly after my Boston Run. He was requesting to use segments of my Boston Post for a new book he was writing on the Boston Marathon Bombings: 4:09:43!!!!! Hmm, YES! He profiles the race of approximately 75 runners from Hopkinton to Boylston Street on Marathon Monday. I feel pretty privileged to share my personal story with him. I wasn't psyched at all when I received an autographed copy  in the mail this October either, ;) NOT! 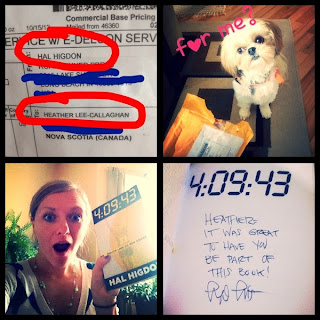 Back to Running
After much much recovery from the historical Boston Course, I dived right into the Blue Nose 1/2 Marathon in May with a determination to beat my current PR but uncertain of my physical ability. Surprisingly, I felt stronger and faster that day than ever before. My strides were fluid and consistent. I crossed the finish mat in 1 hr 37 minutes 57 seconds slashing 2 min 28 seconds off of my previous PR. 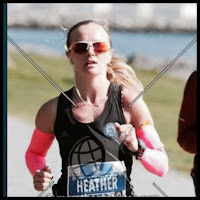 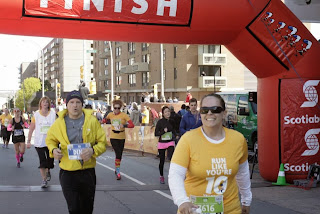 In June I set my sights on the Johnny Miles Marathon. Not for a PR or a win, but just to get another Marathon under my belt.

Race day was 20 degrees at 8 a.m.  Uh oh! Plus there was major construction along the usual route, which meant the course had to be modified. A four loop course of slightly more than 10k, that had many sections of solo running as well as inclines. Good times. Because of the looping nature of the route, runners were dropping down to the half left right and centre. I held on. It was tough. When the bicycle leader came and told me I was in first place for female I was baffled. Hurting, and baffled. There was 1.5km to go. Nearly a mile. After a quick shoulder check I gunned it for the finish. My first ever marathon win! It was pretty awesome. :) 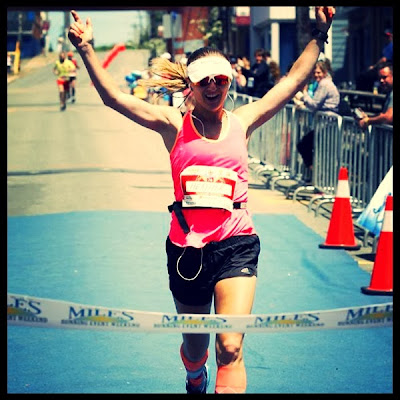 Being a school teacher is quite conducive to running as you can imagine. It leaves you with the summer to run you butt off. When you do it with friends it's that much more enjoyable! Courteney and I ran many races together over Summer Vacation like this one and this one and this one. I'll never forget the day I slept in and woke up to Courteney yelling my name in the entrance! LOL. Or how about the day when I got my My Marathon Ink! 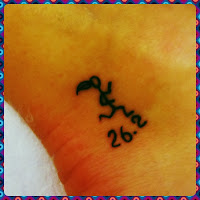 My third Full Marathon was held in PEI this past October. I trained really hard for this one in hopes of securing a Boston Qualifying Time and a Personal Record. After a physical battle and some mental self-coaching through the final miles, I ran under the clock at 3 hrs 32 min 36 seconds. BQ-check PR-check :D It was a glorious day! 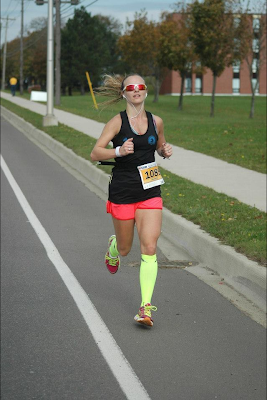 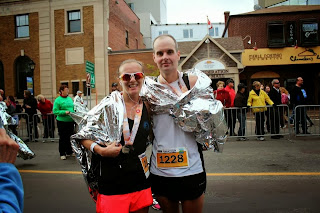 We also got to meet our Sneaker Guy, Hashem in Real Life! He's awesome :) 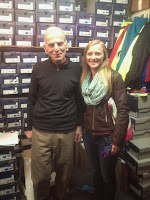 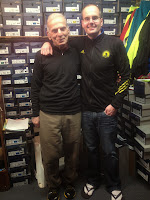 ﻿My Love for the Boston Marathon has caused me to sit with face in hands crying and later jumping for joy at work, with my rejection and then invitation to run 2014! There have been many ups and downs in 2013 for GGR. I wouldn't trade any moment because it has molded me into the person and the runner that I have become. 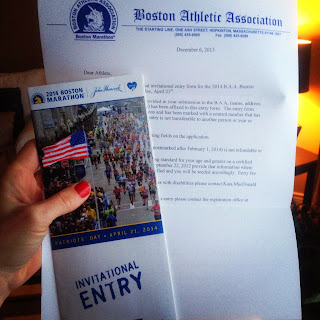 Friends on the Run
I also got to meet some running & blogging friends this year like Heidi, Erin and Janet. 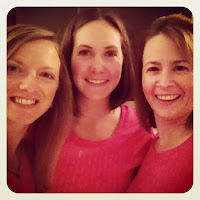 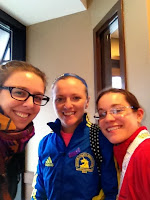 Erin and I met in person for the first time after I crossed the PEI Marathon Finish Line. We even ran a relay together in November. Super fun! 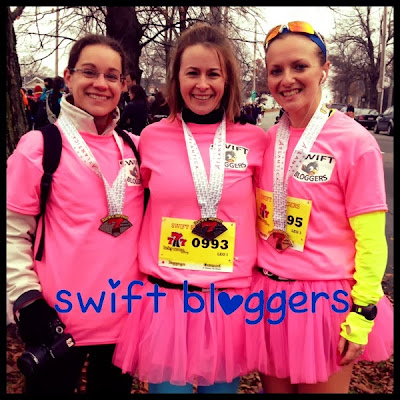 Check out some of my favourite snap shots from GGR's year of running 2013. ﻿ 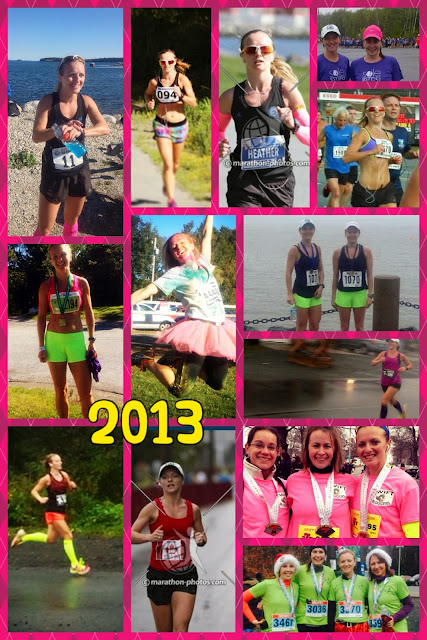 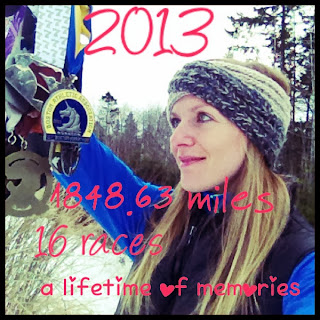 Thank you for running by my side, whether it be virtually or in person, through all my adventures over this past year.