Yesterday we got up bright and early enough to squeeze in a quick 2 mile run  before heading to Prince Edward Island.

After some last minute stretching and foam rolling we were on our way! 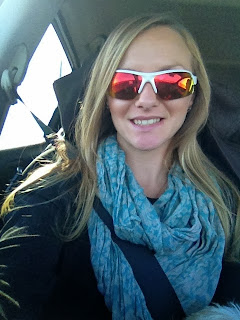 Entering PEI!
This place is beautiful!!! {View from Confederation Bridge} 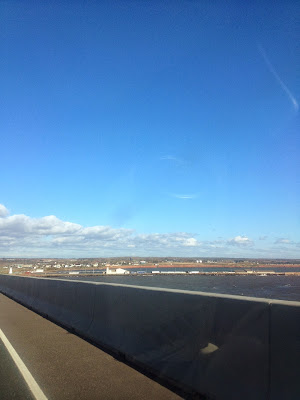 Once we arrived and checked into our hotel we headed straight to Race Kit Pick up! 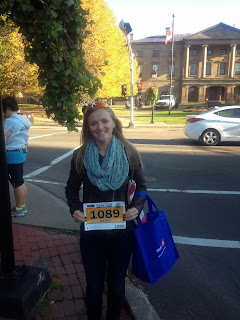 Guess what we did next....Visited Hashem!!! It was so exciting: He gave us a tour of his store free socks and Gatorade and of course we both left with new kicks. :D 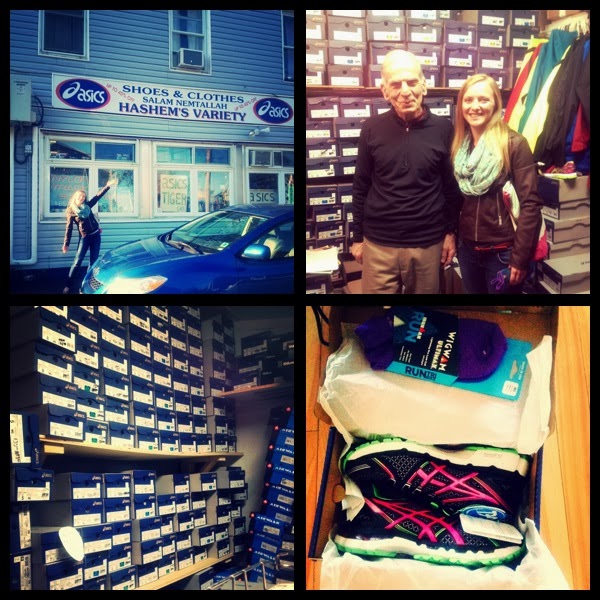 Pre-Marathon Prep:  {Nerves had kicked into high gear and things got real :0}

Supper included whole wheat linguine in pomodoro sauce with garlic toast at Boston Pizza.  I laid out all my gear and headed to bed. 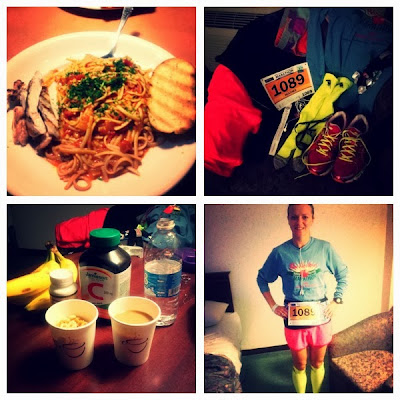 The next morning's breakfast included dry cheerios in a cup.....lol, along with banana, beet juice and coffee. We had no milk or bowls so my usual oatmeal got switched up last minute. You gotta do what you gotta do!

I felt quite celebrity-esque when I looked out the bus as we cruised through Charlottetown in the dark with the chartered bus convoy carrying a mass of marathoners to their starting destination.  If you'd like to see 'nerves at best' board a bus full of marathoners on their way to start!

Ready, Set, Go!
The race started off with quite a chill and I said goodbye to my Valley shirt seen above. :(  Hopefully it will get donated. :)  I ran with the 3:30 bunny along with my friend Paul and a few others. The Pacer, Andrew, said it was the largest group he's ever carried along for so long.  The pace felt comfortable and I felt like I could run like this forever. What does 'Early stage of the race Heather' know anyway? LOL.

We could not have asked for more ideal conditions to Marathon in. Cool crisp air and partly sunny skies.

I loved hearing the stories our bunny told us and it made the time pass by super quick. Before I knew it, we were just over 10 miles (17k)! The course was divided up into kilometre markings, which actually was cool since they seemed to 'tick' off quickly.......about until 37 of them.....Ooof!

Bang on at the halfway point we take a sharp right turn into the trail. {This was an 8 mile section of the marathon}. I actually enjoyed running the trail since it reminded me of the Rails to Trails I run on during my training.  There was a water stop as we entered the trail and I took a Gatorade. Literally after I swallowed it I got a side stitch. :S  I fell back from the pace group for a few minutes and then the bunny came back to check on me. He told me to breath deeply in through my nose and then sharply out through my mouth.  This worked and I caught up to the rest within a few minutes. A few miles later and the next water stop same thing happened---Frustrating!  Paul was so awesome and offered to walk with me for 10 seconds. I refused to make him walk, or myself for that matter...stubborn! Paul assured me that even if I walked the hills, that we'd later encounter, I'd still break 3:35: Boston Qualifying Time. The stitch slowly dissipated....slowly.  Once we were done the trail we were basically all separated. The bunny was far away, but within sight. One of the other guys who was with him had fallen back behind me at this point. Paul was pacing a friend so he graciously stopped to wait for his friend and told me to continue on.

Back on the Streets @ 21. something miles:  There was a lot of excitement once we returned to the roads. This was also the Relay Exchange Point and the spectators had the music bumping. I was pumped since I was down to single digits....and oh yeah, running alone! This is a dangerous time to be running alone. With nothing but your own thoughts and your iPod you mind can be your worst enemy.  I knew this would happen so I was prepared. I only gave a second of a thought to my upset stomach, wobbly legs, cramping toes and did I say upset stomach?  Then I got to work.

I hit the hills feeling surprisingly strong.  We were running through the main streets of Charlottetown, which passes a dreaded hill by a Volkswagon dealership, at which point I poured water over my head and ate a chunk of chocolate that I was handed by a volunteer. :D  There was another massive incline heading into town and then another by University of PEI.  This one went on for days! I actually passed several runners here. Some were half marathoners and others were fulls.  My last few miles were faster than some of my mid-race miles!

I could see the white and black Finish banner up ahead and I pushed it as hard as I physically could. The bunny was coming in the opposite direction to go back and get more runners to bring in. We high-fived, I crossed the mat and staggered into the arms of a random stranger who was volunteering.  Matt was there to greet me. :)  He had run another solid Marathon!!! 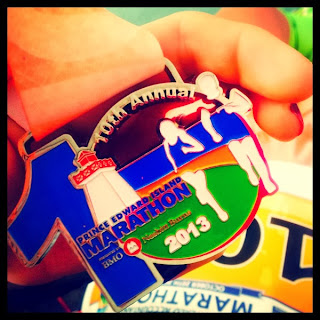 In terms of course difficulty, I'd rank this marathon as the 3rd most challenging I've run. Very rolling with three hills in the late stages of the game.....not when you want to see them! I thought the initial portion had a spectacular view, loved the trail and enjoyed seeing the farmland, not smelling it though....LOL. 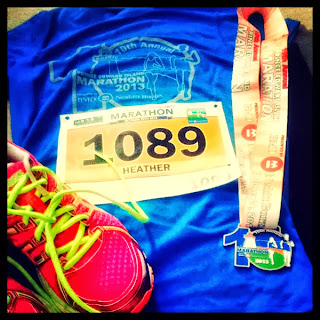 I also met Swift Fox for the first time in person today! It was so exciting!! And in true blogger fashion I demanded that we get a photo together! ;)  Thanks SF! She completely smashed her 10k! 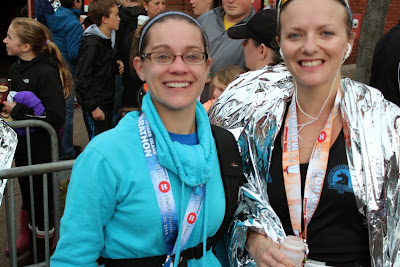 Medical staff were lurking behind and near me and one of them said they didn't 'trust' my eyes....lol. I do admit, I looked like a fine mess. Matt and I headed into the food tent and one of the same volunteers appeared out of nowhere checking me again and said he didn't want to find me on the concrete!

After slurping on some citrus, downing chocolate milk and Gatorade, we finally made it back to our hotel. BTW: This marathon was super organized, had awesome fuelling for runners, transportation and spectacular post-race food! 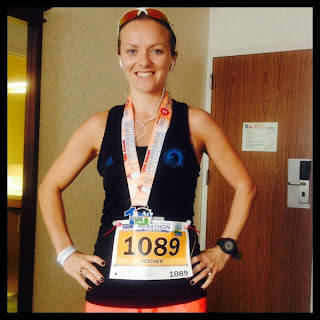 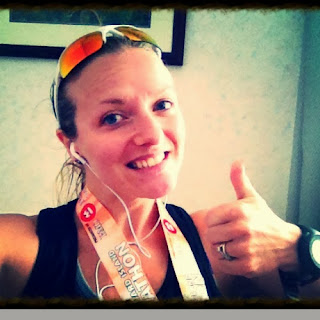 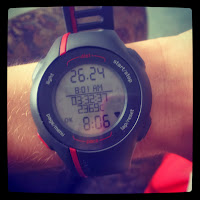 And yes, I know my hair is totally rockin' after that crazy run!

After a fantastic trip to Cows ice cream, we headed home.....to then eat pizza! ;)

Thanks for stopping by GGR. Have a beautiful evening.