I have not fallen off the face of the 'blogging world,' so don't worry. ;)  I've just been super busy with the first actual full week of school, in a new school with a new position. But I'm loving it!

Tuesday's Run
On my Marathon Training schedule for Tuesday was a ten miler.  I decided against it for two reasons: 1. My double race weekend and 2. I was having some right foot pain as a result of my new Mizuno sneakers, which apparently do not agree with my fit. :(  It never pays to cheat! haha.

I ran out along the main road for 3.75 miles and then ran home. I felt great, but at 6 miles the bottom of my right foot began to pain to the point where I kind of panicked realizing it wasn't just something that would dissipate.  Boo :(  I stopped at 7.2 miles as opposed to my planned 7.5 and walked home. mad. 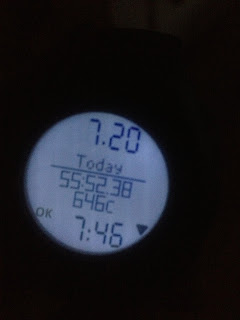 Matt told me a phone call to Hashem would make me feel better. And he was right. After a very lengthy conversation, I felt great. He told me not to run on Wednesday or Thursday. :0 And I was like, "What?!" LOL.  He said, "Nothing you do now will help you. You will only race as well as you've tapered." So, advice in mind, I haven't ran since Tuesday night!!! He also sent me the new Gel Keyanos, which I L.O.V.E.! And don't forget, he always throws in free socks. :D 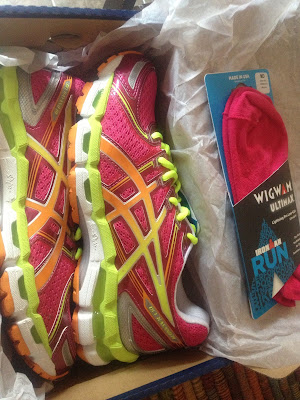 Him and I both agreed that the Nimbus 15s had far too many miles on them, which is why my toes began to blister at the end. :(
Thursday
Today after work I headed over to Maritime Race Kit Pick up to get Matt's, Courteney's and my race kits. :D  Super exciting! ﻿ 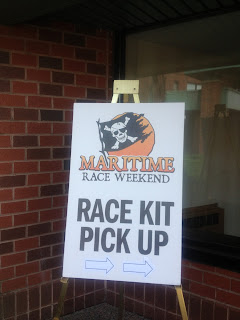 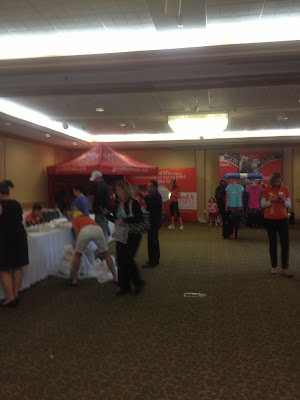 If you recall, I'm doing the Sunset 5k Friday evening and the Sunrise 1/2 Marathon on Saturday morning. I plan on running the 5k easy so that I can do well in the 1/2......hopefully! Check out my super cool Tartan Twosome Bib! 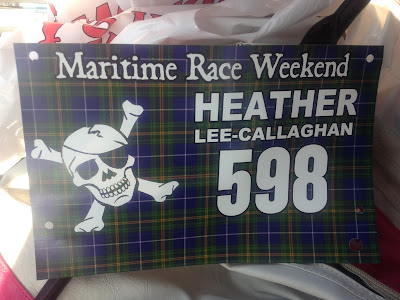 New Gadget
Well, I don't think I told you that my iPod (on the left) had 9 lives. Key word here, "had."  After Liverpool, the Tely 10, Marathon by the Sea and many long runs, I thought it was dead. It would shut off, mid-run, but then some how rejuvenate itself once it dried out. It was over 4 years old and has served me well. Recently I was blaming my ear buds when my iPod would shut off mid-run. But after purchasing new ear buds yesterday, I realized that it was in fact the device itself. :(  So for a pretty sweet $48, I have a new purple shuffle, (on the right). :) Don't worry, I returned the new ear buds purchased yesterday.  I think I would have died if I had to race the 1/2 without music on Saturday. 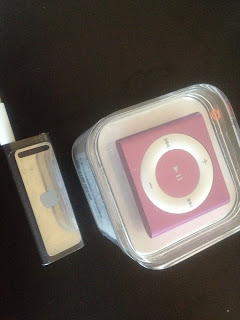 Oh by the way, Tropical Storm Gabrielle is heading up towards the Nova Scotia Coast and should arrive just in time for Maritime Race Weekend. Juuuust great!

Boston Update
All week I've been getting less and less hope that I will be running in the 2014 Boston Marathon. :(  With such increasing interest worldwide in the Marathon following this year's Bombings, the fastest registering first system is displaying a quick fill of registrants. I am still hopeful I'll get in on Monday morning, but I can't be certain. {fingers crossed}

That being said, check out my super cool finisher's certificate I received in the mail today! It is sooo being framed! ;) 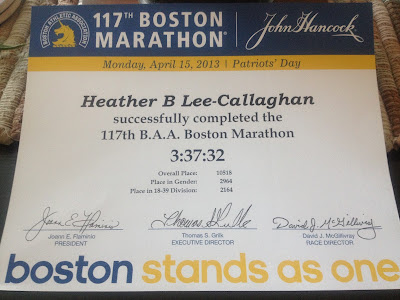 The BAA also sent out a finisher's results book that contains the name of all finishers. I finally found my name after searching the 'Male Finisher's' section and being disappointed that they 'left me out.' LOL. Sometimes excitement just gets the better of me.  When my brain started working again, I looked under the 'Female finisher's section' and found me! 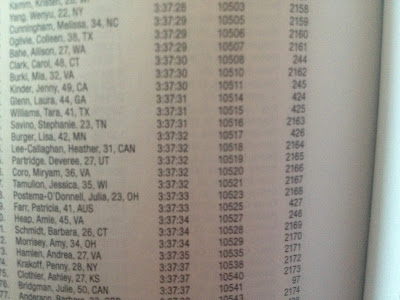 Are you running in the Maritime Race Weekend? If not, you should! Look what was in my kit! Plus I get 3 medals if I finish both races!!! 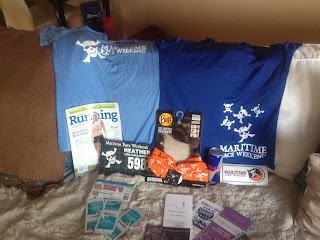 So, wish me luck and not just for the run. Hopefully I don't blow away tomorrow night or get drowned in the rain! ;)

Thanks for stopping in to check out GGR!